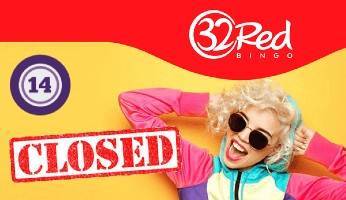 It comes as both a shock and a huge shame that we’ve lost another online bingo site following the announcement that 32Red Bingo has ceased to exist.

Although 32Red will continue operating its online sports betting, casino, live casino, and Slingo sections, the bingo tab has disappeared from the website’s main menu.

And, if you click through a website link to the old 32Red Bingo site, a pop-up message appears to advise viewers that “We’re sorry, 32Red Bingo has closed!”

There’s not much in the way of an explanation as to why the site has shut down, although the operator states that “the last winning ball” was drawn on 28th October 2020.

We suspect that it’s because the Microgaming software that powered 32Red Bingo was withdrawn a couple of months ago, leaving it and other popular online bingo brands such as Butlers, Dream, Dotty, and Glossy temporarily homeless.

Although some of the other affected brands have risen from the ashes on new software platforms, it seems as though 32Red has decided to cut its losses and concentrate on its other online offerings instead.

Are there any alternatives?

If you were a member of 32Red Bingo and are looking for a new home, 32Red says that you can still enjoy playing Slingo games and online slots using your old bingo account. However, for those looking to play traditional bingo games, it recommends joining its sister site, Unibet Bingo. Here you will find Relax Gaming powered bingo featuring traditional 90 ball and 75 ball bingo, but also the more Scandinavian-style 75 ball game for added variety. You will also find the unique Hexabingo game.

The history of 32Red Bingo in a nutshell

32Red Bingo launched in 2008 and it became popular relatively quickly, not just because of its Microgaming-powered bingo suite, but also due to its extensive and well-explained game guides.

The site was known for offering several community jackpots and guaranteed games, but for many, the highlight was the Immortal Romance Bingo room which was inspired by the Microgaming slot of the same name and included several special features that revolved around the slot’s central characters such as Sarah and Michael.

Players were also allowed to earn Red Rubies – loyalty points which could be exchanged for free credit.