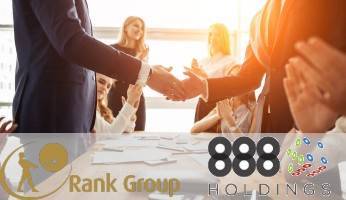 The first is the Rank Group who has signed a 3-year agreement with the maker of Slingo games, Gaming Realms, while the second is 888 Holdings PLC which has announced a new partnership with NetEnt Live.

Rank’s 3-year distribution agreement will allow many of its online bingo and casino brands to offer its members a full complement of Gaming Realms’ Slingo products.

The Slingo Originals titles are already live at one of Rank’s major bingo sites, Mecca Bingo, and are now being added to the Rank brands that were added to the group’s portfolio after it bought Stride Gaming’s UK-facing brands last year.

The management team at the Rank Group are over-the-moon about their new partnership. Their Chief Product Officer, Riaan Slabbert, says that Rank Digital are “huge fans of Slingo” and that they “look forward to building on its success” as well as bringing Gaming Realms’ “market-leading content to a wide audience than ever before”.

The Rank Group completed its acquisition of the online bingo and casino operator, Stride Gaming in late 2019 after lodging a bid worth just over £155m for the company in May 2019.

Also this week, 888 Holdings PLC has announced that it has agreed a deal with the award-winning live casino game developer, NetEnt Live.

The deal will allow 888 to roll out NetEnt’s hugely popular live dealer suite across its flagship brand, 888 Casino.

The soon-to-be-added games include NetEnt originals like Perfect Blackjack and Blitz Blackjack, both of which support auto-play. There will also be several different forms of classic roulette and blackjack, including Rapid Auto-Roulette and VIP Auto-Roulette which allow the player to enjoy high levels of interaction and immersion using multiple camera angles, an intuitive and customisable gaming interface, a chat facility that allows them to converse with the dealer, and betting options for both low and high rollers.

888’s Senior Vice President, Guy Cohen, describes NetEnt as “one of the world’s finest live casino developers” whose live games will allow 888 Casino members to enjoy “the best of Last Vegas, Atlantic City, and Monte Carlo wherever they are”.

Currently, NetEnt’s board of directors are seriously considering selling the business to Evolution Gaming for around £1.9bn. By combining its operations with its biggest live casino games rival, 888 believes that it would be able to “further strengthen its market position in the slots segment”, as well as increase its ability to form partnerships within the US states that have opened up for online casino such as New Jersey.