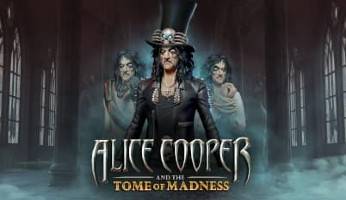 Heart Bingo is one of the first online bingo brands to go live with the exciting new Play’n GO slot that’s based on one of the world’s most famous musical icons. Alice Cooper has now taken centre stage in the games lobby and the WhichBingo team took it for a spin to see if it lives up to expectations.

We’ll bet that the new Heart Bingo mascot Olly Murs’ heart skipped a beat when he discovered that he’d soon be joined by one of the biggest names in rock music!

While Alice Cooper might not have been recruited as a brand ambassador for Heart Bingo like Olly was, he’s been working alongside the software developer Play’n GO to create an exciting new video slot called Alice Cooper and the Tome of Madness.

What’s the game all about?

If you’ve played Play’n GO’s Rich Wilde slots before, you’ll notice that there are quite a few similarities between them and the new Alice Cooper and the Tome of Madness game. However, the slot’s appearance is dramatically different.

Rich Wilde has been replaced by a scary vision of Alice bound in chains and padlocks, and there’s also a rousing rock soundtrack that you can help but turn your speakers up to appreciate.

In the base game, an empty chapel acts as the background but when the Free Spins Bonus is active, you’re transported to a live rock concert.

What special features are there?

Firstly, Alice Cooper and the Tome of Madness is a Cluster Pays slot. So, you don’t need to worry about paylines. To create a win, simply land at least four matching symbols that are connected horizontally or vertically.

The Cascade feature gives you additional winning opportunities by removing winning symbols and replacing them with new ones.

On non-winning symbols, you could be randomly awarded one of four modifiers such as Chamber of Horrors or Insane Asylum.

You can also be awarded an Alice Cooper Mega Wild which walks across the reels between cascades.

The Hat of Madness feature can produce extra wild symbols or award Reality Spins which can also come with a win multiplier.

Where can I play it?

Alice Cooper and the Tome of Madness is available to play at the new Heart Bingo site, as well as several other leading online bingo brands. Do you dare take it for a spin?