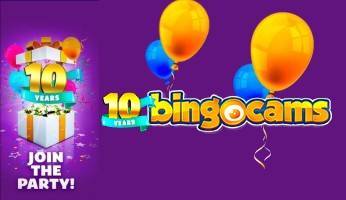 All Change for Bingocams: News

This year Bingocams will be celebrating its 10th anniversary and, surprisingly, it’s still the only UK-licensed online bingo site that uses integrated webcams as part of the playing experience. It also boasts the patented Live Win Moment feature which gives players additional chances to win prizes by capturing their winning moments live on film.

To mark the important milestone in its journey, the owner and operator of Bingocams, Dazzletag Entertainment, has plans to revamp the site. The changes will lead to “a one-of-a-kind bingo experience and strong community feeling”. If anyone is concerned that the live video feeds may be culled as part of the redesign, there’s no need to panic, as Dazzletag has confirmed that webcam use will continue to play an important role in Bingocams. Plus, players will soon be able to see the site’s live chat hosts on their mobile devices, which was not possible on the current platform.

The operator has recently signed a deal with the game supplier Play’n GO and is now in the process of integrating Play’n GO games across all of its online casinos and bingo sites. 25 of the supplier’s slots have already been added, including the popular title Book of Dead.

Dazzletag Entertainment has also been busy with some of its other brands.

For example, Fruitkings (an online casino) is already available in the UK, Finland, Ireland, and New Zealand, and it’s just gone live in Canada. The operator has also gained a Maltese operating license so that it will be able to target other international markets.

In the second quarter of 2021, Dazzletag will be launching two of its UK brands (Peachy Games and Casushi) in Ireland, Canada, Finland, and New Zealand. And thanks to a lifting of gambling restrictions in the Netherlands, the operator will be able to serve the Dutch market from October 2021.