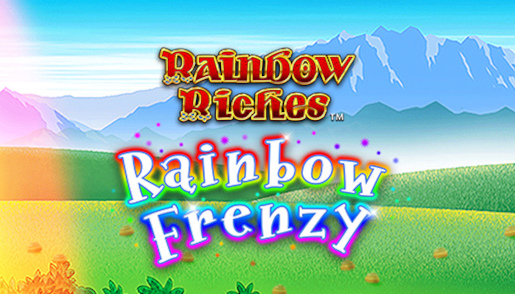 There’s an exciting new slot to play at some of your favourite online bingo sites, including Gamesys brands such as Jackpotjoy and Double Bubble Bingo. It’s the latest game in the ever-popular Rainbow Riches series by Barcrest and it boasts two fun-packed bonus features.

The new Barcrest online slot is called Rainbow Riches – Rainbow Frenzy, and it was released on 31st March 2022.

Like its predecessors, the new game features a colourful and upbeat Irish theme, and the paytable symbols include a laughing leprechaun, a pot of gold underneath a rainbow, a gold coin, the familiar Rainbow Riches logo, a magic toadstool, a harp, a lucky horseshoe, and a leprechaun’s green hat.

The slot uses 5 reels and 10 fixed paylines, and you can create winning combinations by landing matching symbols from left to right.

Should you manage to land at least 3 bonus symbols anywhere in view, the Free Spins Bonus is awarded. The feature includes the special Leprechaun symbol which collects pots of gold that can range in value from 2x to 50x.

How much can I win?

The maximum that you can win on a single spin is 2,000x your total bet.

The first-ever Rainbow Riches slot was launched in 2008 and it is still as popular today as it was back then. It includes two reel sets, one of which is for the Road to Riches feature.

In 2012, Barcrest released Rainbow Riches Pick ‘n’ Mix and then took another five years to produce its Free Spins version. Drops of Gold, Home Sweet Home, and Rainbow Riches Slingo followed in 2018 with Leprechauns Gold and the Megaways version both making their debut in 2019.