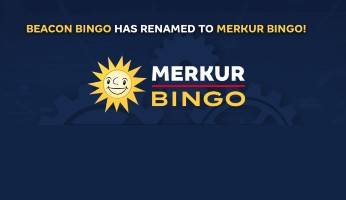 Beacon Bingo has recently undergone a rebranding exercise and from here on in, it will be known as Merkur Bingo.

If the name Merkur rings a bell, it’s probably because the company is best-known for making online slots as well as running gaming centres in popular locations across the UK under the Merkur Slots and Cashino brands.

Merkur has owned Beacon Bingo since 2012, so it seems odd that it’s taken the former so long to put its stamp on its bingo offering.

Merkur Bingo now boasts the largest club in all of Europe and it’s located in Cricklewood, North London. It also bingo venues in Northampton, Redcar and Lowestoft.

While the company must wait until at least 17th May 2021 to reopen its clubs in England, it’s hopeful that players will be keen to return. As well as offering electronic bingo and club specials like Glow, Ladies Night and Meltdown Bingo, the clubs serve a range of food and beverages and boast dedicated slots lounges.

Although Merkur has been busily applying for licenses to open new bingo and slots venues in popular high street locations, it was recently announced that the Loughborough branch will not re-open and it appears that the prospects for its former Beacon Bingo hall in Redcar aren’t too good either.

Last month, a spokesperson for the company confirmed that it was carrying out “a consultation process regarding a proposed closure” leaving many employees and customers of The Esplanade venue wondering where they stood.

However, the club’s official Facebook page has yet to be updated with confirmation of the closure, and the venue is still listed as “temporarily closed” in the new Merkur Bingo website’s Venue Finder.