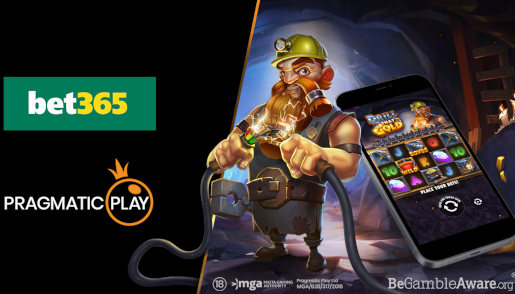 Bet365, the operator behind Bet365 Bingo, has just entered into an agreement with Pragmatic Play. The deal will see the software provider’s full online slot catalogue added to its website, and its ever-popular Drops & Wins promotion will also be included.

Bet365 is hopeful that the new partnership will give it an even greater hold over the UK gambling market, as well as provide its customers with a stronger selection of games.

Some of the new slot games that will now be available through Bet365 include popular Pragmatic Play titles like Wolf Gold and Gates of Olympus along with brand-new releases such as Chicken Chase and Drill That Gold.

Julian Jarvis, who is the CEO of Pragmatic Play, considers Bet365 to be “the largest operator in our industry” and he, therefore, feels that the new partnership “is a hugely important moment for us”.

The software supplier’s networked Drops and Wins promotion will also be hosted at Bet365, giving live casino and slot fans the chance to score a share of £1m every month.

While Bet365 started out as an online sportsbook, it has since extended its offerings to include poker, bingo, in-play, and more.

Its bingo players can already enjoy an exclusive selection of side games, including slots like Lucha Rumble, Cleopatra II, Pharoah’s Fortune, Secret Garden, Crystal Lotus, and Stampede. Plus, it also boasts multiple themed and standalone bingo rooms including Cash Cubes, Deal or No Deal 75, The Catwalk, Guilty Pleasures, and Rainbow Riches Bingo.

You can find out more about the operator in our Bet365 Bingo review.

Pragmatic Play has been creating online slots and casino games since 2015 and has won several awards in the years that have followed.

4 years ago, it launches its first bingo game and has since created many more including the popular game Bingo Blast.

The provider’s online bingo suite and creative team of game developers helped it to win not one, but two WhichBingo awards in 2020 for Best Bingo Provider and Best Slots Provider.