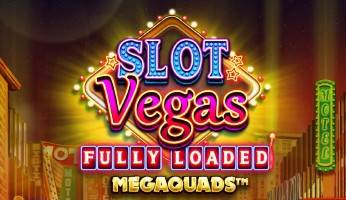 Slot Vegas Fully Loaded Megaquads is the first online slot that allows players to play four slot games at once. In this article, we look at how the game works and why the Megaquads mechanic is likely to take Big Time Gaming to even greater heights.

According to the Australian software developer, Big Time Gaming, Slot Vegas Fully Loaded Megaquads offers us four times the fun as it lets players enjoy four slots at once.

In the base game, the four slots merge horizontally while in the Free Spins Bonus, they merge vertically to offer as many as 16,777,216 ways to create winning combinations.

If you compare Megaquads to the first Big Time Gaming game mechanic Megaways which offers up to 117,649 ways to win, the fact that Megaquads boosts the number of ways to win to over 16 million is seriously impressive!

Each set of reels consists of 4 reels and 4 rows, and with each spin, you can create winning combinations by landing matching symbols on adjacent reels beginning with reel 1.

The game offers a special feature called the Rainbow Wild Bonus where 2 of the 4 reel sets are combined to give you one 8-reel slot.

There’s also a Free Spins Bonus that uses two 8-reel slots with 4 rows, and if two Rainbow Wilds appear adjacently on both slots, you unlock the maximum number of ways to win (16,777,216).

To add to the excitement, the game boasts multipliers that increase by x1 each time a win consisting of one of the top four symbols is created.

Big Time Gaming is known for pushing the boundaries with its innovative concepts, leading Evolution Gaming to acquire the company for around £450m in July of this year.

In the same week that Big Time Gaming launched its Slot Vegas Fully Loaded Megaquads game, it has also released an exciting new Megaways slot called Kingmaker Fully Loaded Megaways. It invites you to embark on a journey through the medieval world of the Four Kingdoms where there’s the potential to win up to 36,000 times your bet.

The software developer is also hosting a weekly €250 giveaway on Twitter.