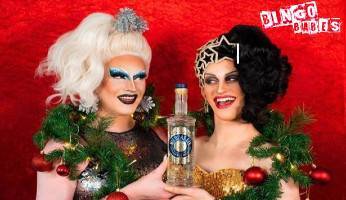 Two of the UK’s craziest and hottest drag queens are preparing to hold a virtual Christmas special, and you can join in the fun with your friends for free.

The Bingo Babes – a.k.a. CJ Banks and Rujazzle – will be streaming their drag bingo party directly into your home from 7.30 PM on Wednesday, 16th December 2020.

Tickets for the event are being sold via SocialEyes and attendees are encouraged to get glammed up for an all-dancing, all-singing extravaganza.

The party’s organisers say that this online bingo special will be “the only Queen’s speech worth tuning into” this Christmas. It’s been organised in conjunction with the upcoming drinks brand, Wildcat Gin which will be giving away some delicious gin-related prizes on the big night.

The event will be in support of the Scottish Trans Alliance – an equality network project that aims to improve equality, rights, and inclusion in Scotland for those who are have been affected by or are/have undergone gender identity and gender reassignment.

The party will last an hour and 30 minutes and will feature everything from hilarious drag performances and lots of chances to win prizes to party games and, of course, bingo.

Who are The Bingo Babes?

The Bingo Babes hail from Scotland and were inspired by the drag queen bingo phenomenon that first appeared on the other side of the Atlantic.

They got together two years ago and have become well-known throughout Scotland for their raunchy bingo calls and “wild nights out” which they describe as “not the experience your granny would be used not” and “definitely not for the faint-hearted”.

The girls are fond of getting their audiences to take part in games like “dirty charades”, and one of their fans, Louise, says that she’s previously seen one of the Bingo Babes “cartwheeling off the highest table in the room right into a death drop”.

We can only imagine what they have in store for their upcoming virtual party!