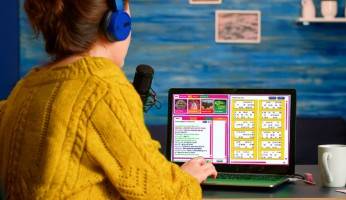 Tying the knot and welcoming a new member of the family into the world are two of the happiest moments that anyone can experience. At Tombola and Buzz Bingo this week, three of the brand’s chat hosts have personal news to share.

We’ve often wondered what it would be like working as a chat moderator at an online bingo site, particularly ones as prestigious as Tombola and Buzz Bingo. We’ve now got a better idea, as the brands’ social media teams have been busy posting about all their CM’s recent achievements.

Roger gets hitched at Buzz

One of Buzz Bingo’s best-known representatives is Roger who can regularly be seen giving away wads of cash in the ongoing live stream promotion “Win Roger’s Winnings”.

Earlier this week, Roger announced that he had finally been able to marry his partner after having had to postpone the wedding twice due to the COVID-19 pandemic. He was keen to show off his wedding ring while broadcasting live on Buzz’s YouTube, Twitter and Facebook feed. You can catch up with all of Roger’s other gossip by tuning in every Wednesday at 8 PM.

Jollyranchers shows off a new hairdo

Now, over to Tombola where CM Jollyranchers is particularly pleased with her recent trip to the hairdressers.

The lovely lassie has just donated a massive 17 inches of hair to charity and can now be seen rocking her new look in the chat rooms.

After the excitement of Tombola’s 13th birthday celebrations last month, what better way to enter September than with a new baby?

CM Wonkabar has just welcomed a new grandchild. Perhaps, he or she will follow in her granddad’s footsteps by becoming a bingo chat host one day?

Chat Hosts and those on the front line in front of the camera providing entertainment and guidance to bingo players everywhere are a vital part of any successful bingo site. It’s therefore fitting that the brands they represent give them all the credit and recognition they deserve.

Forward look for September at Tombola

September may be coming to a close, but there’s still plenty of fun to be had at Tombola. There are Big Link Nights scheduled for 21st, 23rd, 25th, 28th and 30th September. Plus, if you’re a member who has yet to claim their Free Fiver, don’t forget to see if your surname has been called on the site’s Promotions page!