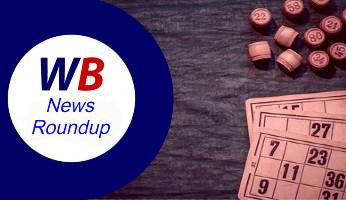 In this week’s news round-up, we count down the days until bingo halls are allowed to welcome visitors again, losing tickets qualify for free scratch cards at Foxy and Gala Bingo gears up for its £60k Golden Ticket game. Plus we’re loving that Buzz Bingo has come up with an innovative way to raise money for testicular cancer, that Evolution Gaming’s casino games are coming to Gala brands, and the weekly bingo tournaments going live at selected Dragonfish sites. Read about how the Mega Moolah progressive jackpot slot has set a new record, and about William Hill rebranding following Caesars’ takeover.

Only 1 week to go until bingo halls can re-open

Those of you who can’t wait until your local bingo hall re-opens have just over a week left to go.

As we speak, independent bingo clubs, as well as bigger chains like Buzz Bingo and Mecca Bingo are getting ready to welcome players back in a COVID-secure environment.

So, start dusting off your dabbers and your lucky mascots for May 17th!

LeoVegas starts its own games studio

The developer will not only create exclusive games for LeoVegas players but also games that it will license to other operators.

Over the next two years, Blue Guru Games expects to create at least 20 titles using a team that boasts more than 20 years of experience in game development, so we are expecting some great innovations.

They run from Friday to Sunday in the Finals Room at brands like Bid Bingo, Chit Chat Bingo, Bingozino and Pink Ribbon Bingo and tickets are very reasonably priced at just 5p each.

The prizes include free bingo tickets and free spins, as well as cash prizes of up to £250.

William Hill to rebrand as Caesars

Following Caesars Entertainment’s takeover of William Hill, it’s been confirmed that Hill’s retail sportsbooks and apps will be rebranded as Caesars Sports. At the moment, there’s been no mention of whether Caesars also plans to rename thenUK William Hill betting shops or other brands in Hill’s portfolio such as William Hill Bingo, although these are likely up for sale to the highest bidder. We’ll keep you posted.

A Belgian player has managed to win over €19.4 while playing on Microgaming’s Absolootly Mad Mega Moolah jackpot slot.

It’s the biggest jackpot ever won through the Mega Moolah jackpot network, and unlike with some other progressive jackpot slots, the winner gets their reward as a lump sum.

Absolootly Mad Mega Moolah is the latest addition to the network, and it launched a year ago. Since May 2020, it’s awarded over €46m in jackpot prizes.

While we all love playing bingo, it’s frustrating when you don’t manage to win a game, so Foxy Bingo has introduced a new promotion that could help turn our frowns upside-down.

All you need to do is play Scratch Bingo games and if you fail to win a line or full house prize, you get to play a free scratch card that could reveal up to £100 cash!

This week, players can begin qualifying for the £60k Golden Ticket game at Gala Bingo.

Simply play the daily Golden Ticket games in the City and Castle rooms for the chance to win up to three Golden Tickets to enter the £60k special on Wednesday, 2nd June.

The £60k Golden Ticket game has plenty of cash prizes to give out, including a full house prize of £25,000 and a £25,00 cash pot that will be evenly shared between all non-winning players.

Over the last few weeks, several lucky players have managed to get their hands on the latest fashion creation from the Buzz Bingo team. Now everyone has the chance to buy their own pair of Buzz Bingo boxer shorts from Etsy with all proceeds going to a charity called Orchid which is raising funds for testicular cancer.

The rather fetching piece of underwear features coloured bingo balls, and they cost just £5.00 per pair. Pop along to the site for a piece of the action.