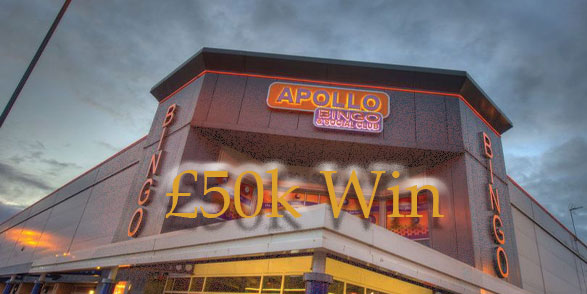 Some of us are happy going to bingo clubs solo, while others prefer to play with close family members and friends. One player who falls into the latter category is from the Mansfield area, who usually plays at her favourite bingo hall alongside her son and nearly missed out on a massive jackpot win when her son was recently unable to attend.

More about the player and her win

Like many big winners, the latest jackpot winner at Apollo Bingo Mansfield has requested to stay anonymous. What we do know, however, is that she says she is “never usually that lucky” despite being a regular visitor to the bingo club.

She usually plays alongside her son, but as he was busy on Thursday, 21st July 2022, she almost decided to stay at home.

After deciding to head out regardless, she found herself among familiar and friendly faces while playing the National Bingo Game. As the 16th number was announced, she realised that she’d got a full house and shouted out to get the bingo caller’s attention.

Initially, she thought that she had just won the full house prize, but the club’s Duty Manager, Neil Smith swiftly realized that it was a jackpot claim. He says that “the club just exploded in cheers and a round of applause”.

What does she plan to do with her winnings?

The lucky player says that she plans to renovate her garden with some artificial grass and will, therefore, be letting her son off lawnmowing duties in future. She also wants to treat her kids to something nice.

The National Bingo Game’s Head of Commercial Operations, Alistair Stewart, sends his congratulations to the lucky winner and says that she hopes her “new garden looks great complete with fake lawn, delivered by a real big bingo win!”

Apollo Bingo Mansfield – lucky for some

This isn’t the first time that Apollo Bingo Mansfield has crowned a £50,000 jackpot winner. In fact, the last claim occurred just two months ago, and the club’s Duty Manager says that he never imagined that the club would be “lucky enough to get another £50k winner quite so soon”.

So, if you live in the area, you might want to pop in for a bingo session next time the National Bingo Game is on!