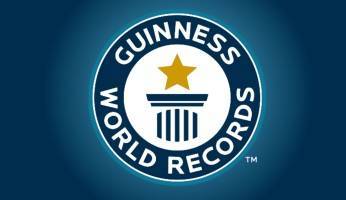 Cartwheeling rollerskaters, underwater magicians and 105-year-old paragliders are all celebrating Guinness World Records day along with a bingo site that pulled off its own unparalleled feat three years ago.

Guinness World Records day has been celebrated every November 18th since 2004 and the day itself inspires people all around the globe to attempt remarkable feats in an attempt to set new records.

This year, the UK’s very own Tinuke Orbit broke the record for the most cartwheels on roller skates in one minute, going head over heels 30 times, while Martin Rees from Hertfordshire performed 20 magic tricks underwater to beat the previous record by seven tricks.

The list of weird and wonderful records being attempted and broken is as long and varied as your imagination, with 105-year-old Yu Te-Hsin’s aerial adventures among the most impressive as he broke the record for the oldest tandem paraglide.

For bingo lovers, Guinness World Records day brings back memories of a sunny scene in Blackpool in 2017, when Sun Bingo wrested two world records away from its competitor Gala Bingo. WhichBingo was there to witness the event, where the world records for the largest set of bingo balls and largest bingo card both fell.

The first record Sun Bingo attempted that day was for the largest set of bingo balls, which the team from Guinness World Records required to be at least 75 in number, and they had to be used in a full game of bingo.

Sun Bingo rolled out a set of humongous balls, measuring 2ft 4in in diameter, onto Blackpool seafront, where adjudicator Lucia Sinigagliesi was present to confirm the new world record.

The ensuing game saw players take away prizes including seven luxury cruises. Graham Thompson was among the cruise winners, and he reacted saying: “I can’t believe it, I’m speechless! I’ve played for 10 years, this is the best prize I’ve ever won.“

Sun betting & gaming director at the time, Tom Ustunel said: “Sun Bingo is known for having the biggest balls in the industry so it makes sense that we set the record straight.”

From there, the event went into the Blackpool Tower Ballroom for a celebrity extravaganza and more world record-breaking bingo.

Former Record Breakers presenter Cheryl Baker performed the hit song Making Your Mind Up with her band, The Fizz, and there were appearances from pop stars Brian McFadden and Keith Duffy.

The voice of The X Factor, Peter Dickson, then called the numbers in a game of bingo that featured a record-breaking bingo card measuring 4×4 metres, once again giving Sun Bingo an entry in one of the world’s best-selling books.

A quote from the time summed up the event and bingo in general:

“Bingo is all about bringing people together to enjoy some fun and be sociable so it’s great that we can celebrate with a host of our most valued customers.“

The records have stood in the three years since, but surely one day someone will attempt to make bingo even bigger. The question is, who will it be?