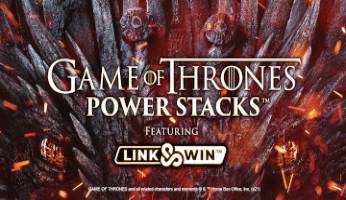 Some of Britain’s favourite online bingo sites, including Double Bubble Bingo and Jackpotjoy , have just added Microgaming’s latest title to their game lobbies.

It’s the sequel to the hugely popular Game of Thrones, and in this version, you get to take advantage of Microgmaing’s Power Stacks, Link & Win and free spin features, as well as play for four fixed jackpots.

In the base game, you get to play in the icy Kingdom of the North while the Link & Win feature whisks you off to the Red Keep in Kings Landing.

Many of our favourite GoT characters are on hand to help create winning combinations, including Jon Snow, Sansa, Daenerys, Tormund Giantsbane and the Night King.

Aside from the dazzling graphics and rousing soundtrack, Game of Thrones Power Stacks builds on the excitement of Microgaming’s first Game of Thrones slot by introducing fully stacked symbols that appear on each spin.

The Iron Throne scatter symbol can help you unlock the Free Spins Bonus where a 2x multiplier is applied to all wins and the wild symbol lands stacked.

Where can I play Game of Thrones Power Stacks?

The same brands also feature the original Game of Thrones slot which was released by Microgaming in 2015.