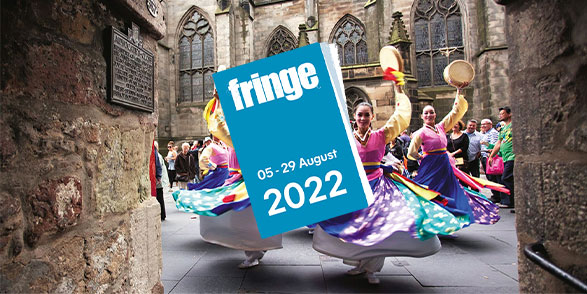 The Edinburgh Festival Fringe (or Edinburgh Fringe Festival , also known as The Fringe or Edinburgh Fringe) is the largest arts festival in the world, bringing visitors from far and wide to Scotland’s capital city where they can enjoy theatre, music, comedy, dance…and even bingo!

The Edinburgh Festival dates back to 1945 when Austrian impresario Rudolf Bing proposed an international festival that would make the Scottish capital “the cultural resort of Europe”.

Two years later, the first Edinburgh Festival took place and was well received by participants and spectators alike, as Europe looked for sources of unity and joy in the aftermath of the Second World War.

Those eight uninvited pioneers paved the way for what would come to be known as the Edinburgh Festival Fringe, which grew in size and popularity until the Festival Fringe Society emerged in 1958 to formalize its existence and ensure artists and spectators could be informed about events.

The festival has retained its ethos of allowing events to take place with no vetting by society, meaning anyone can put on a performance of any type at the Fringe. Over the decades this has helped the Fringe achieve vast popularity among performers and spectators who enjoy everything from circus shows to spoken word performances, physical theatre, opera, and more.

In 2018, the Fringe spanned 25 days during which 3,548 different shows were performed by more than 55,000 artists, putting it third behind the Olympics and the football World Cup in the world’s biggest ticketed events.

Bingo at the Fringe

As tends to happen with any hugely popular global event, bingo has found a way into the Edinburgh Festival Fringe with a number of notable appearances over the years.

Just four years ago, the vastly successful 2018 edition of the Fringe played host to Jemima Levick’s play Bingo!, which toured Scotland that year and picked up a Drum Scottish Event Award for Small Event of the Year along the way. The play told the story of Daniella, a bingo-loving woman who resorts to desperate measures in her attempt to land a big jackpot!

Levick’s acclaimed play is not the only stage show about bingo, with a book by Michael Heitzman and Ilene Reid entitled Bingo! The Winning Musical has been turned into a full-length musical comedy that won awards following its release in 2005.

Theatre buffs may also have caught Olivier Award-winning actor Patrick Stewart in his role as William Shakespeare in the 2012 staging of the play Bingo, originally staged in 1973 and which still tours to this day.

Of course, attendees to the Edinburgh Fringe are never short of options if they want to play bingo, with outrageous stage shows like Dabber’s Social Bingo hosting events like Next Top Bingo Caller, to the delight of culture lovers from all over the world.