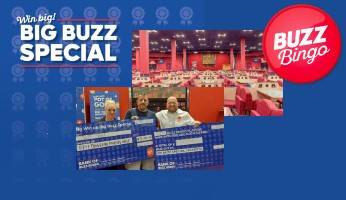 Buzz Bingo has been celebrating lucky dabbers since reopening its clubs on 17th May. It’s now awarded over £1m to the winners of its special jackpots, with a player from Hanley claiming the 21st big-money prize.

It’s hard to believe that it’s only been 11 weeks since bingo clubs were allowed to reopen in England, and now that lockdown restrictions are finally ending in other parts of the UK, bingo players can once again enjoy getting together with their friends at venues like Buzz Bingo.

Buzz Bingo currently operates 92 bingo halls, making it one of the biggest bingo chains in Great Britain, and since reopening them up again on 17th May, it’s paid out more cash than any of its competitors.

The lucky recipient of Buzz’s 20th Jackpot was a male player called Jeff Short. Jeff was playing at the South Shields branch when he managed to win the jackpot and he plans to invest his winnings in the new business that he created during lockdown.

Less than one week later, a grandmother claimed the next Big Buzz Special Jackpot at Buzz Bingo in Hanley. Mima is a regular face at the club, although it’s taken her over two decades to score such a big win. Mima told Buzz that she wants to use the money to travel to Canada and see some members of her family.

According to Buzz’s Chief Retail Officer, Peter Brigden, the company has given out more than £2m per week. He also says that he’s “delighted to see another Big Buzz Special winner”.

More about the jackpot

The Big Buzz Special Jackpot plays at Buzz Bingo clubs, as well as online. The jackpot is awarded when a player claims a full house in 42 numbers or fewer, and even if more than one player claims the jackpot, they each get the full £50,000 of prize money.