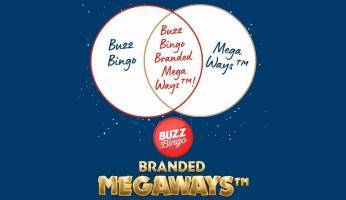 Since Bonanza first burst onto the scene in November 2016, online bingo and casino players have come to know and love Big Time Gaming’s Megaways pay system.

Thanks to various licensing deals, other software companies including Blueprint and Red Tiger have also released Megaways slots, but now there’s a brand-new one that you’ll only find at Buzz Bingo.

This week, the award-winning bingo brand revealed that it now offers an exclusive slot called Buzz Bingo Megaways which its members can play for as little as 20p.

How to play Buzz Bingo Megaways

To win on Buzz Bingo Megaways, you must match at least three symbols on the first three reels, and the diamond-studded wild symbol makes this even easier as it can replace any other symbol.

Collect star symbols to fill the star meters and you could unlock the multiple bonus games for the chance to win even more cash rewards.

Besides the launch of this exciting new slot, Buzz Bingo has been entertaining players in all manner of different ways this month.

For example, it’s been holding a Chat Stars Live Show. A Battle with the Stars competition in its Value Room, which involves the chat hosts undertaking a range of laugh-out-loud tasks that could help players win a share of £250 by guessing which of the two Chat Stars teams will win the challenges.

Over on its Facebook page, the brand has also been giving away free cash, Buzz Bingo vouchers, and branded merchandise through competitions like Challenge Rog. Plus, there’s still the chance to play for a £10,000 holiday in Buzz’s £10k Getaway prize draw. N.B., entry closes at 11.59 PM on Sunday, 31st January 2021.