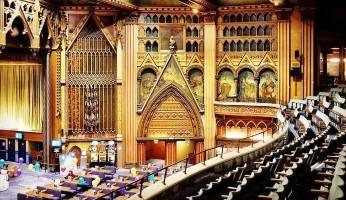 The WhichBingo Awards could hardly have been set against a more spectacular backdrop than the stunning Buzz Bingo hall in Tooting, South London, where the 2021 edition of was filmed.

The hall is something of a work of art, and players at Buzz Bingo Tooting might have trouble keeping their eyes down given the staggering array of visual features that make up the building’s interiors.

Built in 1931, the club was originally the Granada theatre and cinema, where the first film to be screened was the American comedy Monte Carlo. After 10 years of welcoming moviegoers, it became a music venue that played host to The Beatles, The Rolling Stones and Frank Sinatra, no less.

Russian stage set designer Theodore Komisarjevsky dreamed up the hall’s spectacular gothic interiors, which he designed to look like a Russian Orthodox church.

The WhichBingo Awards ceremony was presented by our very own Charlie Shakespeare, who certainly enjoyed his time there and also read up about the building’s history.

He said: “It was such a pleasure to host this year’s WhichBingo Awards, and especially visiting such a stunning Bingo Club to shoot the video.

“Growing up in Sutton, Tooting’s Buzz Bingo hall is just five miles up the road from my childhood home. I had passed the building so many times over the years, but I never knew how beautiful it was inside.

“The Grade I listed building was originally an Art Deco cinema when it was first opened in the 1930s. My parents just about remember it as a picture house, before the venue was closed in 1973.

“I was astonished to learn that a decade prior, throughout the 1960s, it welcomed international music acts including Jerry Lee Lewis, Frank Sinatra, The Rolling Stones and The Beatles, who performed two sold-out sets on 1st June 1965.

“To film at this local prestigious building was an honour.”

Charlie is not the only admirer of the building, which is known to be Mayor of London Sadiq Kahn’s favourite building in the city.

He will be relieved to know that the building was saved from demolition in the 1970s, when it was given its Grade I listed status in order to ensure its future, making it the only former cinema of its type to carry the title.

Historic England describes the building as: “A world class cinema – without doubt the most lavishly decorated interior of any cinema in Britain and among the most lavish in Europe; the finest evocation of the sumptuous movie palaces of the 1920s and 1930s.“

Among the many nods to the past that can be spotted around the building is the fourteen-rank Wurlitzer organ, which survives under the stage and would have been played to entertain the early cinema audiences at the hall.

Other features include Gothic windows, mirrors and chandeliers, grand painted arches and side gables adorned with elaborate paintings.

Photo by Paul the Archivist

Komisarjevsky wanted cinemagoers of the 1930s to have a religious experience when they attended the building, and its impact is no less dramatic now as it welcomes bingo players to its intricately decorated surroundings.

The WhichBingo Awards 2021 were captured by Joe Kaufman from Red Kite Films, whose first feature film, Seat 25, has won multiple awards at film festivals around the world.

Joe said: “At Red Kite Films we create cinematic films, telling the stories of the brands, companies and individuals we work with.

“We specialise in art house, lifestyle and documentary film making.”