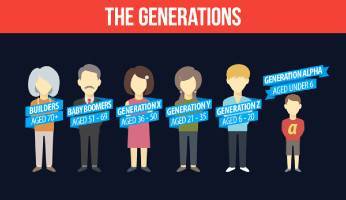 Can You Tell a Boomer from a Millennial?

Whenever you read an article, see a news report or listen to a podcast that has anything to with lifestyle, finance or employment, it will very often refer what has become known as generational cohorts. Whether it’s about online engagement, mortgages or shopping habits, these tags that are applied to the various generations in the UK and have become a very useful shorthand to describe the different demographics within society and how these groups tend to live their lives.

As we discovered in our latest survey for the WhichBingo Report 2021 the demographic and age range of online bingo players is beginning to fluctuate. However, how many of us understand what the generational terms mean? Can you tell a Boomer from a Millennial? What’s the difference between Gen X and Gen Alpha?

Although these sorts of terms are quite broad brush and flexible, this rough guide will nevertheless help you to make better sense of them so that next time you see an article talking about how a particular generational cohort spends their money or leisure time, you’ll have a better idea as to who precisely is being talked about.

Baby Boomers (often referred to dismissively just as Boomers), are generally defined as being the generation born between 1946 and 1964 during the population boom in the UK and other western countries that began in the aftermath of the Second World War. This means that Baby Boomers are now aged somewhere between their mid-fifties and mid-seventies, and so tend to be well established in their careers or to have retired.

Boomers remain the largest sector of the population in the UK (although Gen X is soon to overtake them), and are generally regarded (often with envy) as the most prosperous and financially secure sector of society. With high levels of home ownership and relatively generous pensions, Baby Boomers generally have proportionally more leisure time and access to resources than subsequent generations.

Although born well before the advent of online technology, many Boomers have nevertheless embraced it, and enjoy playing online bingo, slots and other games, as well as being active on social media as a means of engaging with families and friends who may now, more often than in the past, live in different parts of the country or abroad.

Generation X (often just shortened to Gen X) are the children of the Baby Boomers and are generally considered to have been born in the mid-sixties up to the early 1980s. Now in their early forties up to their mid-fifties, Gen X is often considered to be the most educated and skilled generation, and the first to have benefitted fully from higher post-war standards of living and greater access to higher education.

As time has passed, many in Generation X have also come to see themselves as the cohort that invented the concept of work hard/play hard, as well as being the most innovative and imaginative post-war generation in the way that it changed and reinvented popular culture.

Millennials (also known as Generation Y or more simply Gen Y) are the children of Generation X and born in the era from the mid-1980s up to the early 2000s, and so are now aged anywhere between their mid-twenties and early forties. This means that Millennials may be either settled down with young families or just beginning their careers, so in this respect, they are the most diverse cohort in terms of their position and status in wider society.

The first generation for whom technology and the internet have been a constant part of much of their lives (albeit before social media became ubiquitous), Gen Y was also the first cohort where higher education was no longer the exception, but rather the rule. At the same time, Gen Y is the first post-war generation for whom having a job for life is no longer the expectation, and who might have several different careers during their working lives.

Generation Z (sometimes known as  Zoomers or Gen Z) were born in the period between the mid-1990s and early 2010s, and have lived their entire lives with the internet and social media as essential tools. Often looked upon despairingly by Baby Boomers as not knowing what real work is, and by members of Gen X as being somewhat self-righteous and unadventurous, Generation Z is now in their teens up to their mid-twenties, and are (rightly or wrongly) perceived as living much of their lives online.

As a consequence, members of Gen Z are often caricatured as being umbilically attached to their smartphones and being obsessed with social media (‘digital natives’ is a more polite way of saying this), although the members of this cohort would more likely consider themselves to be a progressive and activist generation that is more committed to good causes, equality and diversity than those who went before them.

Generation Alpha is the generational cohort born from the beginning of the 2010s onwards, and so is made up of children who are in primary school or just beginning secondary school. As products entirely of the 21st century, it is thought that what will mark out Gen Alpha from preceding generations is that are more likely than their parents or grandparents to be brought up in households that do not necessarily contain both (or either) of their biological parents, to move more frequently, and to live in rented rather than owned accommodation.

Gen Alpha is also unsurprisingly expected to be the most tech-savvy generation, who will stay in education for longer and thus enter the workforce later in life than previous cohorts. This also means that they can be expected to start families later and perhaps to have fewer children, which will of course have implications for the next generation (Gen Beta?) that comes after them.