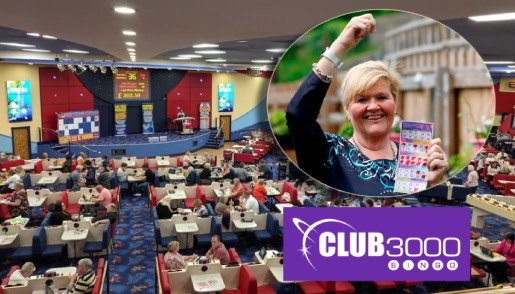 A day or night out at the bingo can sometimes result in an unexpected win. However, it’s not every day that a new bingo convert finds themselves taking home a massive jackpot. Find out how a Welsh mum recently struck gold at Club3000 and what she plans to do with her winnings in today’s news article!

The lucky lady is called . She’s 54 and a mother to three children. She’s asked to keep her surname anonymous, but as she’s been pictured in her local newspaper proudly holding up her winning bingo ticket, we’re sure that some of her friends and neighbours will recognise her face.

The great thing about this particular win is that Julie only started playing bingo 3 months ago, and she’s since made several trips to her local Club3000 bingo hall alongside her daughter-in-law since.

Having won a few modest prizes since starting to play, Julie never expected to win so much money.

Before she discovered that she’d won thousands of pounds rather than the regular full house prize, the mum was somewhat perplexed as to why other players were “screaming and shouting” when she stood up to claim her prize. On returning to her table, one of the bingo club’s employees informed her that she’d won £15,000 but quickly realised that she’d made a mistake and returned to tell a shocked Julie that it was really £50k.

Julie confesses that the news caused her to almost fall off her chair and says that she’s still in “complete shock” now.

What does she plan to do with all that money?

Julie says that her daughter asked what she planned to spend her winnings on and that she told her that she was considering getting a tattoo, treating herself to a new mattress, and getting a garden makeover. When her daughter pointed out that her plans were likely to cost just a few thousand pounds, she went back to the drawing board to consider other things that she could buy for her and her family.

Does she plan to continue playing bingo?

Yes! Julie’s even returned to her local bingo club in the days since her big win and says that her main reason for playing is “for the fun and atmosphere”.