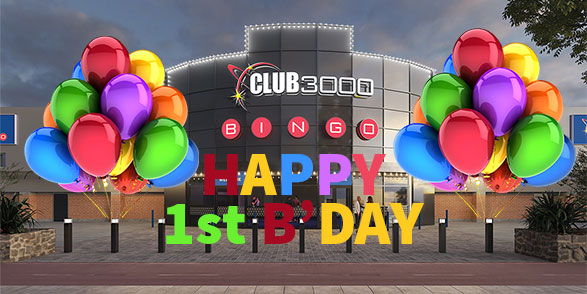 One of the biggest independent UK bingo operators is planning on holding a big bash this week to celebrate one year since its newest venue opened. Club 3000 Bingo in Robin Park, Wigan opened on Friday, 30th July 2021, creating 40 new jobs and an exciting new space for bingo fans to enjoy everything from bingo games to big-screen sports and arcade games.

As part of its big birthday weekend, the venue will be running plenty of special offers to help its customers celebrate. The planned promotions include a beach party with cabaret entertainment, free gifts, and half-price bingo tickets.

What a year it’s been!

Since launching in July of last year, Club 3000 Wigan has awarded more than £3m in prize money. That’s an impressive average of £60k per week!

In its opening month, the club teamed up with Wigan Today to offer one lucky person the chance to win an exclusive VIP box for 6 people with £50 worth of vouchers for each guest, a round of drinks, and an electronic bingo package.

The bingo hall’s manager, Alex Whitmore, says that managing the club is “a dream appointment” and is excited to help the venue’s customers celebrate this weekend with “the biggest party in town”.

Visitors to the club have been leaving plenty of positive reviews on websites including Facebook. Their comments speak volumes about the club’s success, with reviewers consistently mentioning the “friendly and helpful staff”, “great value”, “lovely food”, and “nice atmosphere”. One player even took the time to thank the venue after leaving £700 of winnings on a table accidentally, which was quickly handed in for safekeeping by a staff member.

More about the club

The club cost approximately £2m to renovate and employs 40 staff. It’s the ninth Club 3000 bingo hall in the region, and the 21st club in the operator’s portfolio.