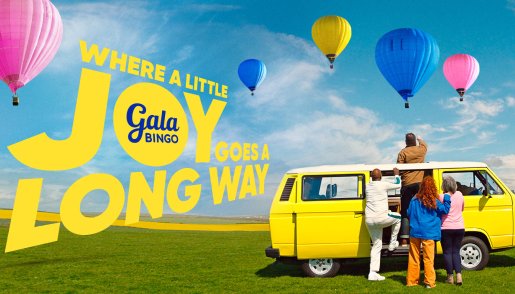 Having been around since 1991, Gala Bingo has had to work harder than newer bingo brands to stay fresh and exciting. In recent years, it has started working alongside creative agencies and TV shows to put itself firmly in the public eye, and its newest partner Neverland has high hopes of “re-establishing its iconic brand with UK audiences”.

What’s the new campaign all about and who is Neverland?

Neverland is a London-based brand strategy and creative communications agency that believes “what you stand for is as important as how you tell people about it”. It has previously been named Start-Up Agency of the Year by Campaign and has worked with an impressive list of famous brands such as Ladbrokes, Tetley, NBC, Kopparberg, Giffgaff, Lenovo, and Unilever.

Last year, it helped Ladbrokes to refresh its brand image with its “Million Drummer” ad campaign. While Gala Bingo is (like Ladbrokes) an Entain brand, Neverland has only just come on board to take over Gala’s marketing. Beforehand, it worked with a creative agency called Antidote, which helped to design and deliver Gala’s “Bingo Like a Boss” short films and ads.

One of Neverland’s co-founders, Simon Massey says that the agency hopes to “bring bingo back with a bounce of fun to Britain” with its new “Look Up” ad.

The ad was filmed earlier this year in the northwest of England, and it features five pals and their dog setting off on a road trip while tracking hot air balloons. The final shot sees the friends standing on a hillside as five balloons line up to form a perfect “BINGO” in the sky above them.

As well as promoting itself via Neverland’s new TV ad, Gala Bingo is also running its campaign using other methods including social media, radio, and taxi and bus wraps throughout London.

Gala Bingo was founded in 1991 as a division of Bass PLC. In 2005, it changed its official name to the Gala Coral Group after purchasing the Coral sports betting business. Following the acquisition, the company was bought out by Ladbrokes, the latter of whom was later purchased by GVC Holdings which is now known as Entain. To find out more about Gala Bingo, why not have a read of our Gala Bingo review?