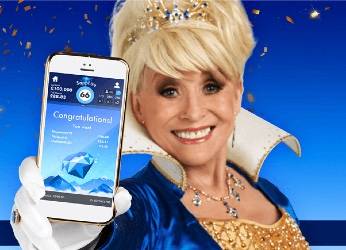 On 10th December 2020, we lost a national institution in the form of Dame Barbara Windsor.

The funny girl from London, who first brought her cheeky sense of humour to the “Carry On” film franchise back in 1964, went on to deliver a captivating performance as EastEnders’ Peggy Mitchell, and for online bingo fans across the UK, she was also known as the “Queen of Bingo” at the one and only Jackpotjoy.

After her passing, Barbara’s widow Scott Mitchell set up a JustGiving page to help raise vital funds for dementia research after his wife was diagnosed with Alzheimer’s in 2014, forcing her to quit her beloved EastEnders, as well as step down from other public roles such as ambassador for Jackpotjoy.

So far, the fundraising campaign has raised over £118,000, with both donations and tributes flooding in from celebrities and members of the public all across Britain.

One of the donors was Gamesys, the company that owns Jackpotjoy, which was eager to pay its respects after working with Barbara since 2010. Gamesys put an incredible £83,000 into the fundraising pot, which at the time of writing, stands at a massive £118,210!

The Reign of The Queen of Bingo

It was back in October 2009 that Barbara first informed her bosses at BBC One’s EastEnders that she was planning to leave the show the following year. Her official last appearance was on 10th September 2010 (although she subsequently returned in 2013, 2014, 2015, and 2016 for brief guest appearances).

However, her 2010 exit from the popular London-based soap was particularly timely due to her recently formed partnership with top bingo site Jackpotjoy. In fact, the first time that Barbara appeared on our TV screens in her “Queen of Bingo” role was in a Jackpotjoy advert on ITV that aired just minutes after her final scenes were shown over on BBC One!

Barbara continued to work alongside Gamesys and its flagship brand for a further seven years, and when news of her passing reached the online bingo operator’s headquarters, it immediately responded with a fitting tribute in which it referred to the bubbly blonde as a “much-loved member of our family”.

In 2017, Barbara hung up her crown and retired from her role as Jackpotjoy’s mascot, but not before her adoring fans were able to see her being hilariously ousted by her replacement, Paddy McGuinness, in a new Jackpotjoy ad campaign.

At the time, we were sad to see her go, but as we now know that her health was continuing to deteriorate, it makes sense that she chose to leave when she did.

On its Twitter post on 23rd December 2020, Gamesys Group added that it was “saddened by the loss of Barbara Windsor, our Queen of Bingo” and encouraged its followers to make a contribution to Alzheimer’s Research UK.