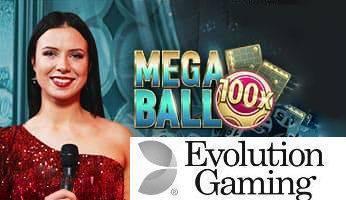 Evolution Gaming has become widely known among the online casino and bingo community as one of the best and most innovative creators of live dealer games.

With an ever-expanding portfolio of game choices that range from traditional tables where players can take part in classic casino games like roulette, baccarat, and blackjack to unique variants such as Dream Catcher, Football Studio, and Monopoly Live, Evolution Gaming has something for everyone to enjoy.

Now, there’s another top title to try your luck with, and it’s called Mega Ball.

Mega Ball is inspired by popular TV shows such as the Wheel of Fortune and the National Lottery Live.

It’s a fast-paced game that’s unique to Evolution Gaming, and you’ll find it in the games lobby of many popular online casinos and bingo sites such as Party Casino, Virgin Games, and Leo Vegas.

The action-packed live dealer show combines bingo-style game mechanics with eight different ball-based betting options plus multipliers, and there’s even a progressive jackpot up for grabs.

How does Mega Ball work?

Mega Ball uses 51 numbered balls, and it requires players to set a stake size before purchasing their desired number of cards, up to a maximum of 200 per game.

As the game gets underway, the machine which holds the balls automatically shoots the balls out one-by-one, and if any of them tally with the player’s cards, they can help to form a line.

Each game picks 20 balls and the software automatically marks off any corresponding numbers on the participant’s cards, as well as rearranging them in order so that you can see which ones are closest to winning.

When the 20th and final ball is drawn, a multiplier of between 5 and 100x is randomly chosen, and if it helps to complete a line, your winnings are multiplied by the respective amount. Sometimes, a second Mega Ball can be drawn, and it gives you a rare chance to enjoy yet another generous win multiplier.

The aim is to create as many winning lines as possible, and thanks to the multipliers, there’s the potential to win up to 1,000,000 times your bet.

The game is supported on laptops, desktops, TV, and mobile devices, and its RTP (Theoretical Return to Player) ranges from 96.05% to 95.40%.

Evolution Gaming refers to Mega Ball as “a unique and thrilling online live dealer variant”, and we suspect that it will prove to be just as successful (if not more so) than the company’s Dream Catcher live studio game.

Mega Ball is the latest addition to Evolution’s Live Game Show offering, and all of them aim to deliver “more entertainment, interaction, and thrills to players than ever before”.

Dream Catcher was the first title to enter Evolution’s Game Shows category, and it uses a spinning money wheel that is operated by a live presenter. Its simple rules and bonus spin multipliers make it easy to play whatever your experience level and all you need to do is bet on which number you think the wheel will stop on.

Other games from this award-winning software supplier that you may wish to try after playing Mega Ball include Monopoly Live, Lightning Roulette, Deal or No Deal Live, Football Studio, Lightning Dice, and Side Bet City.