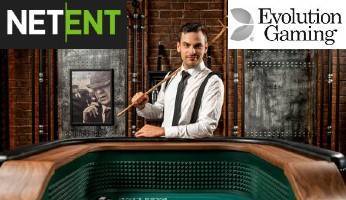 Evolution Ups its Shareholding in NetEnt

Two of the biggest names in the online gambling industry have moved a step closer to merging after Evolution Gaming announced that it now owns around 97% of NetEnt shares.

Back in June of this year, NetEnt agreed to accept the Swedish equivalent of €1.8bn offered by Evolution Gaming, allowing the latter to purchase 90% of its shareholding.

It was originally hoped that Evolution would complete the takeover by early November after the acceptance period started in mid-August and was due to expire in late October.

However, it first had to wait for approval from the CMA (Competition and Markets Authority) and the Malta Competition and Consumer Affairs Authority which were not received until the end of September.

The “extended acceptance period” has now expired, but Evolution Gaming says that its original purchase offer was declared unconditional and is, therefore, complete.

In a recent update, the live casino software supplier confirmed that is now moving forward with a “compulsory buy-out procedure” to acquire the shares that were not submitted in the offer. NetEnt has also applied to Stockholm’s NASDAQ to request that its shares are delisted.

It’s been confirmed that NetEnt will be completely reorganised and integrated under the Evolution Gaming banner, although we suspect that as the NetEnt name holds significant power and weight, Evolution may continue to produce certain games (possibly slots) under NetEnt branding.

However, Evolution has already said that its intended development of online slots will be significantly streamlined. So, players who have been looking forward to new titles from the maker of hit games like Gonzo’s Quest and Starburst may be disappointed.

At the same time, NetEnt’s live casino product, which is used by some of the world’s most popular online casinos and bingo sites, is also being made redundant as Evolution Gaming already has a live casino product which it continues to add to.

News sources in Malta say that hundreds of jobs have been lost as the NetEnt gaming studio (which is based in Qormi) has just been closed down.

Naturally, we’re concerned for the staff who are affected by the loss of the live casino studio. Plus, it also seems a huge waste to lose such a popular product as it was less than three months ago that NetEnt increased its studio capacity in response to “heightened demand” for its live casino suite over the past year.

Evolution has requested that NetEnt’s chief executive, Therese Hillman, remain in her position until the first quarter of 2021 to help support the integration of the business.

The company is continuing to expand its available selection of games through its planned rollout of 12 new releases by the end of the year, many of which have already gone live, including Speed Blackjack, Lightning Baccarat, Crazy Time, Mega Ball, Dragon Tiger, and Craps.

Evolution, which currently employs more than 3,000 live dealers, will also continue to create products under its other acquired brands which, aside from NetEnt, consist of Red Tiger and Ezugi.