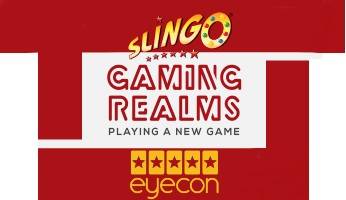 Eyecon and Gaming Realms Team Up for Iconic Slingo Game

If you love to play Slingo and you also consider Fluffy Favourites to be one of your all-time favourite online slots, prepare to do a dance for joy because Slingo Fluffy Favourites is coming to an online bingo site near you very soon!

We’ve just discovered that Gaming Realms has entered into a multi-year partnership with Eyecon, the maker of Fluffy Favourites. So, while we know that the duo is currently collaborating on a Slingo edition of Fluffy Favourites, there’s also the potential for the partnership agreement to lead to other Eyecon slots such as Shaman’s Dream, White Wizard and Beat the Bobbies being giving the Slingo treatment…

When will Slingo Fluffy Favourites be released?

Slingo Fluffy Favourites is due to be released both in the UK and worldwide from Wednesday, 28th October 2020, and we can’t wait to find out what it holds in store.

At the moment, both Eyecon and Gaming Realms are playing their cards very close to their chests, but the only screenshot of the game that we’ve come across seems to look pretty close to the original Fluffy Favourites slot when it comes to the graphics.

For example, you have the colourful marquees and rides in the fairground background, and you can see the familiar faces of the panda, the purple hippo, the duck, the turtle, the blue rhino, and the lion peeking out from the left-hand side of the playing area.

The grid consists of 5 columns and 6 rows, and special symbols like the joker wilds can, as usual in Slingo games, help increase your chances of completing Slingos.

It seems as though Gaming Realms and Eyecon are big fans of each other’s work, with Gaming Realms’ Chief Financial Officer, Mark Segal describing Eyecon as an “iconic brand” He continues to say that the “new collaboration” will help to “bridge the gap and reinforce the compatibility of slot [games] and bingo”.

Eyecon’s Commercial Director, Paul Gielbert, confirms that Fluffy Favourites continues to be one of its biggest success stories, as well as “one of the most popular games in the market”. He hopes that revamping the game with the Slingo game mechanic will produce a title that “fans are going to love”.

More about Fluffy Favourites and Eyecon

It was back in 2006 that Eyecon first captured the hearts of bingo and casino players worldwide with the release of its iconic Fluffy Favourites slot.

The game got so much positive attention that it went on to inspire Eyecon’s team to create multiple sequels including Fluffy Too, Fluffy in Space and Fluffy Favourites Fairground.

The original game uses 5 reels and 25 paylines. Its characters are inspired by electronic toy grabber box machines, and the special features include a Free Spins Bonus and a Prize Picker Bonus.

This is not so surprising given that Eyecon was acquired by the casino industry giant, Playtech in 2017, although Eyecon’s games are still marketed under the Eyecon name.