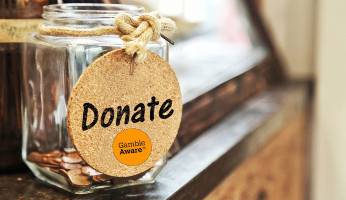 The gambling help and addiction charity GambleAware has revealed that it has received £2.3m of voluntary donations from the UK gambling industry during Q1. The biggest donor was Entain, which has so far given £2m.

Many of you will be familiar with the GambleAware logo which is commonly displayed on online bingo and casino sites. But did you know that GambleAware operates as a charity so that it can help people who believe that they’re at risk of gambling harm?

Due to the vital work that the grant-making charity carries out, it’s essential that it receives sufficient funds each year, and as a fully transparent charity, it publishes both the donations and the pledges that it’s received throughout the year.

How does GambleAware ensure it gains funding?

Currently, all UK-licenced gambling operators are asked to donate a minimum of 0.1% of their Gross Gambling Yield (GGY) to GambleAware each year, although those with smaller GGY can choose to donate amounts of £250 and above.

In Q1, the charity received an impressive £2.3m of voluntary donations from its supporters, which included SkillOnNet, Play’n GO, BetVictor, Mansion Europe, Videoslots and Entain.

Entain, however, was by far the biggest donor in Q1, handing over a massive £2m to GambleAware.

Despite having a new name, Entain has been a highly successful company for decades, and in recent years its brands, including Ladbrokes, Coral, Party Poker, Gala Bingo, Foxy Bingo and Cheeky Bingo, have gone from strength to strength. Its joint venture with MGM Resorts International has also seen it enter the US gambling market.

Recently, however, there’s been a significant backlash against one of its leading brands, Gala Bingo, which has ditched the Virtue Fusion bingo platform in favour of Entain’s own in-house platform without warning players.

Virtue Fusion is a subsidiary of Playtech, the latter of whom has just become the first recipient of GamCare’s new safer gambling standard award. According to GamCare’s Head of Safer Gambling Standards, Playtech has “demonstrated a clear focus on continuing to develop and improve its approach to safer gambling in respect of products supplied to gambling operators” in Great Britain.