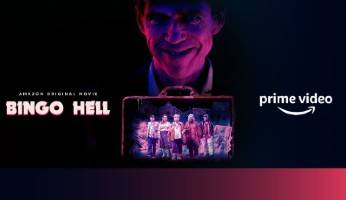 “Bingo Hell” – one of several films that forms part of Amazon’s Prime Welcome to the Blumhouse series – has been sending shivers down many viewers’ spines. Do you dare venture into the bingo hall? Find out what WhichBingo thought about the movie!

Back in August, we published a weekly news round-up that gave you the heads-up on an exciting new series of horror-thrillers that were due to air on Amazon Prime.

Of all the four movies, just one caught our immediate attention as it was called “Bingo Hell”.

Despite not being horror fans, we decided it was high time to find out what it was all about. So, come the release date of 1st October 2021, we turned the lights off, grabbed the popcorn and proceeded to enter the dark and chilling world of Gigi Saul Guerrero’s “Bingo Hell”.

Who wrote and starred in the movie?

“Bingo Hell” was directed by Gigi Saul Guerrero who has come to be somewhat of a legend in the horror movie industry. She also directed one episode of Amazon’s 10-part series “The Purge”.

Gigi herself co-wrote “Bingo Hell” with help from Perry Blackshear and Shane McKenzie.

It stars Richard Brake (Batman Begins, Peaky Blinders and Game of Thrones), L. Scott Caldwell (The Fugitive and Lost), Adriana Barraza (Drag Me to Hell, ER and We Can Be Heroes), and Joshua Caleb Johnson (The Good Lord Bird).

What’s the film all about?

Lupita, a 60-year-old neighbourhood activist discovers that a mysterious entrepreneur called Mr Big has taken over her local bingo hall, and she encourages the residents to fight back against the potential gentrification of their community.

However, she quickly realises that there’s something distinctly more sinister about Mr Big as her friends and other visitors to the bingo hall keep ending up dead.

Our verdict of “Bingo Hell”

If like us, you’re a little squeamish, you won’t have to hide behind the cushions too much and there’s plenty of dark comedy to enjoy in “Bingo Hell”. The movie also boasts excellent cinematography and sound effects, and the characters (apart from Mr Big) are endearing. The only downside is that watching it might change your mind about making a trip to your local bingo hall!