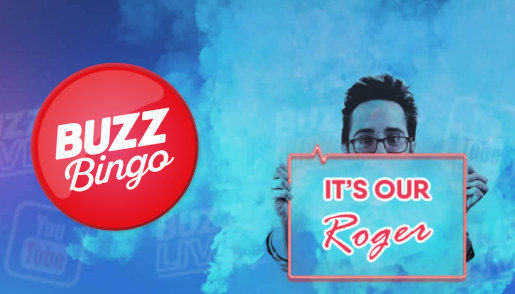 How the Mysterious Roger Can Help You Win at Buzz Bingo

If you’ve ever played at Buzz Bingo online, you may have noticed the same face popping up around the site or seen promotions that mention a guy called “Roger”. If you’re unaware of who “Roger” is, you might be interested to know that the most famous chat star at Buzz Bingo regularly offers players the chance to win extra prizes.

Roger is one of several chat hosts (a.k.a. chat stars) at Buzz Bingo, and he works alongside people like Alfonzo, Amelia, Connor, Leanne, and Samuel. While the chat stars have a dedicated page at Buzz Bingo where you can get to know more about them, Roger has an entire section that explains all about what he does.

It states that Roger worked in video content creation for several years, but he’s also a man of many talents as he has also spent time at a professional wrestling school, makes cocktails, and is a trained gardener.

He’s been working with Buzz Bingo for the past few years where he’s responsible for creating, producing, and hosting the brand’s live stream and video content. He describes himself as “one of the biggest geeks” and is a massive Star Wars fan. He also adores his dog Alfie who regularly appears alongside him during Buzz Bingo’s live streams.

On Roger’s page, you can check out some of his previous videos including a guide on how to play online bingo at Buzz Bingo and how the operator is making its land-based club safer places to play.

How can Roger help me win?

Every Wednesday at 8 PM, Roger hosts a live stream called “Win Roger’s Winnings”. You might wonder how Roger has money to give away, and the answer is particularly interesting. Over the course of the show, he’s tasked with playing bingo games or online slots to try and make a profit of at least £200.

Regardless of how much (or little) money he makes, one player is guaranteed to win between £50 and £150 cash. However, if he succeeds in winning over £200, another five players each gain £10 cash.

Each week, he announces a prize draw entry code that lets you take part in the competition. During the show, you can also vote which box he should open in the Buzzone Box Bonanza game for the chance to score a free bonus code.