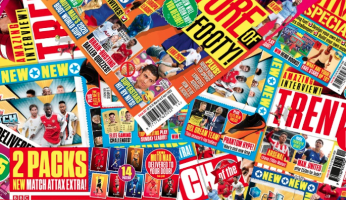 A study by the University of London’s Goldsmiths College has found that a 2019 edition of the BBC’s Match of the Day magazine was littered with gambling logos.

This is despite the magazine being relaunched in 2018 to target a younger audience of 8 to 14-year-olds.

A whopping 52 logos were discovered in the May 2019 issue and rather than being discreet, the University’s researchers say that they were “highly visible”. In fact, the team say that a gambling firm’s logo featured on every other page of the 68-page magazine. It also counted 37 logos in the March 2019 edition of MOTD and 38 in the January 2020 issue.

However, it wasn’t just Match of the Day magazine that was named and shamed by the researchers. The January 2020 Kick! Extra magazine contained even more gambling logos at a count of 59.

The study’s findings have been published in a journal called “Soccer and Society”, and they explain how many of the gambling logos that featured in the children’s magazines and sticker collections were unavoidable due to football shirt sponsorships.

As the lead author points out, the ASA’s guidelines state that gambling operators and marketers must ensure that under-18s are not exposed to gambling-related advertising. She also explains how photos of players wearing shirts that feature a logo can be quickly replicated across multiple media sources and merchandise, including magazines, stickers, and football cards, which are often seen by young fans.

A lecturer at Goldsmiths, Dr Gavin Weston, is worried that youngers may “not have the experience or critical faculties to understand the significance” of such logos and “products that have addictive qualities”. He backs up his concerns by referring to the latest figures from the UKGC which show that an estimated 55,000 children have a gambling problem.

This could be another significant factor in the arguments for banning shirt sponsorship by gambling firms.