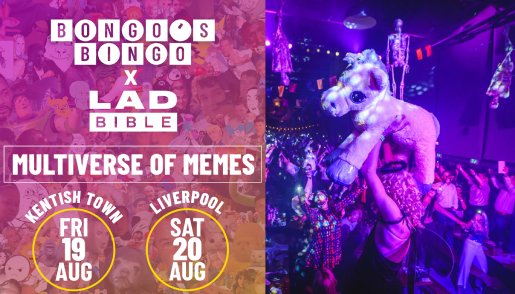 Two of our favourite brands have just joined forces to bring live bingo lovers a one-of-a-kind experience this summer. LADBible and Bongo’s Bingo are collaborating for two nights only in August 2022, and tickets are selling fast.

What are the gigs all about?

The “Multiverse of Memes” nights are set to take place at the O2 Forum in Kentish Town on Friday 19th August and at Content in Liverpool on Saturday 20th August.

As well as the standard Bongo’s Bingo crazy prizes like mobility scooters, Henry Hoovers, and giant pink unicorns, there will be the chance to win cash prizes, take part in dance-offs, and enjoy rave intervals.

Thanks to LADBible, guests will also be able to rub shoulders with a host of special guests including some of Britain’s favourite meme stars.

Players are being encouraged to get into the spirit by dressing up as their favourite meme stars such as Arthur, Yodel Boy, and Kermit the Frog.

Tickets start at £16, and the organisers will be donating a percentage of all profits to Kooth, the online mental health charity.

Everyone over the age of 18 is welcome. So, whether you’re in your 20s or 90s, you can grab a ticket and join in the fun.

Memes are typically videos or images with an accompanying piece of text that are shared on social media and via messaging platforms. They’re usually humorous in nature and feature both celebrities and ordinary individuals, the latter of whom often achieve overnight stardom due to their memes going viral.

Who or what is LADBible?

LADBible is a digital publisher that publishes a mix of documentary, video, and editorial material that covers topics ranging from current affairs to entertainment and celebrity interviews. It was founded in 2012 and its brands (which also include UNILAD) reach 69 million users each month.

Who is Bongo’s Bingo?

Bongo’s Bingo describes itself as “the definitive bingo experience”. It has held events in more than 50 locations around the world since it was founded by Jonny Lacey (a.k.a. Jonny Bongo) and Joshua Burke in 2015.