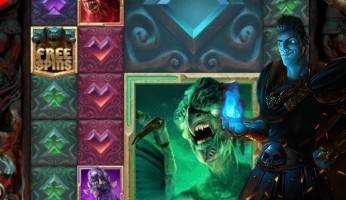 Are you ready for some good news? After a little bit of a lull, those pesky online slots software providers have begun to crank the output up once again (naturally, Play’n GO with their ‘one slot’ per week in 2020 pledge haven’t slowed down their input). This means over the past two weeks or so we have seen some new slots that are really worth playing.

There are some nice new slots promised before the end of 2020 too … which is good news as what with a second COVID lockdown seeming an inevitability we need something to cheer us up! No one’s looking forward to a COVID Christmas, that’s for sure!

Here are some brief details about the latest online slots worthy of your attention over the last week or two.

Now, we know what you are thinking – this latest release by the prodigious Play’n GO has a title that is a portmanteau of the words ‘Hell’ and ‘Halloween’. Well, you are kind of right, but you are kind of wrong too! This slot is another of Play’n GO’s odd series based on slightly obscure rock bands, following on from Saxon, Twisted Sister and Annihilator.

Helloween are a German power metal rock combo who have been rocking the charts (aside: not they haven’t) since the 1980s! This slot celebrates their most famous (or least unknown) album, Keeper of the Seven Keys. The game has a number of special features and most of them are based on songs from this ground-breaking (aside: no it isn’t) slab of vinyl.

Joking aside, this is a very fine game with lots of pleasing features. It only has one Helloween track playing though, but don’t despair – this slot has a ‘mute’ button.

Go back a couple of years ago and the whole slotting world would get themselves all in a lather when a new NetEnt slot was released. Think Gonzo’s Quest, Starburst, Aloha! Cluster Pays (of which a new Christmas edition is about to be released), Finn’s Swirly Spin … so many classics.

No one really considers NetEnt to be the kings (even the dark kings) of online slots these days. We now have from them sequels, re-skins and slots being given the Megaways treatment (more on that later) and pretty average slots like Dark King Forbidden Riches.

This slots game does look nice, but it’s one for NetEnt fans only, with only five reels, three rows, twenty paylines and a couple of decent-enough features. It lacks NetEnt’s usual levels of inventiveness though, and – although you might think we are being a little harsh – we expect better.

Yggdrasil is regarded as one of the ‘heirs apparent’ to NetEnt’s throne, and although they have released plenty of great games of late, they’ve released some right duffers too. Having said that, we really did like Lucky Neko Gigablox from them, which was released in the summer.

Yggdrasil has expanded their Gigablox quota by one, doubling it at the same time. If you are not aware of the concept, then allow us to explain. Instead of a slot having reels, slots with this concept have blocks that fall into place. While the majority of these blocks are just single squares, some of them can be 2×2 and 3×3 in size, right up to 6×6. All blocks act as a number of single blocks of the same symbol.

Hades (the Ancient Greek ruler of the underworld) Gigablox takes the same concept as Lucky Neko (cat) Gigablox and … doesn’t do much with it. Indeed, there’s a lack of wilds in this game (wilds can only be generated – they do not land) and that’s a bit of a puzzler.

Having said that, the graphics used in this game are really something else … the underworld here is populated by some fearsome looking demons! This really is a scary slot, so try not to play this one in the early hours of the morning!

We mentioned NetEnt in one of our reviews above, and we also mentioned Megaways – the unique, ground-breaking and highly successful concept introduced by Big Time Gaming and available (under licence) to other slots software providers. NetEnt has announced that several more of their classic games are going to receive the Megaways makeover following on from the success of Gonzo’s Quest Megaways. Towards the end of 2020 and the beginning of 2021, you will able to try a few spins of Twin $pin Megaways, Fruit Shop Megaways, Thunderstruck Megaways and Dead or Alive Megaways.

Also over the next month or so expect to see Nitropolis by ELK Studios, Disco Diamonds by Play’n GO and Best the Beast: Griffin’s Gold by Thunderkick. Check back here in two weeks for more hot slots released and the latest online slotting news.