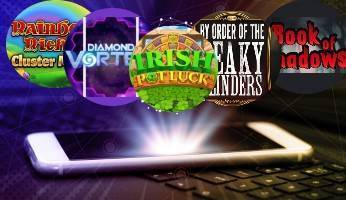 Well, summer is nearly over, but did it really happen? What with the pandemic and the associated lockdown, social distancing, the topsy-turvy weather and the cancellation of the Olympics and the European Football Championships, summer 2020 didn’t really happen … a bit like 2020 in general.

The world of online slots has at least managed to bring some joy. Here is our regular round-up of the best new slots that have been recently released.

When is an online slot not an online slot? When it’s Diamond Vortex from Play’n GO! This excellent and entertaining slot is quite like no other, with three ‘reels’ formed into a circle of hexagons. This cluster pays slot also has one further trick up its sleeve – when you land a win the wheels rotate to re-jiggle the symbols and hopefully land cascading wins.

Look out for the hotspots too! If symbols land here you can expect extra-special features to be triggered. Diamond Vortex may seem a little complicated at first, but you’ll soon get your head around it. It really is a slot with a difference or two.

This title is now made by SG Digital, the company that swallowed up the original company behind the game – Barcrest. All the familiar concepts of a Rainbow Riches title are here with one distinct exception as this is now a ‘cluster pays’ slot as opposed to paylines. This really is one of the best ‘cluster pays’ slots so far released in 2020.

Before you go “oh no, not another ‘book of’ slot” we implore you to at least give this Nolimit City release a shot. Here at WhichBingo we are always in favour of games that have options, and here you can choose to play with three, four or five rows of this slot active. It does cost you more per spin to have more rows activated, but the RTP of this game increases every time that you do.

This a spooky slot with a gothic appearance – think Immortal Romance but with a more cartoon-like look and feel. This game also has some great gamble features too but, because of UKGC rules, those features are likely to be disabled at UKGC-licensed casinos.

After a few weeks delay for unspecified reasons, Pragmatic Play has finally released the slot that’s based on the BBC TV series about gangs in Birmingham at the turn of the last, last century. This slot has symbols based on all the major characters in the hit Peaky Blinders TV show, including Cillian Murphy who plays the leading role in the series, Tommy Shelby.

This has two special features based on the show’s violent theme – Shelby Betting Shop and By Order of the Peaky Blinders. Fans of the TV show are likely to get very excited indeed by this game, but those who haven’t seen it (which is a shame as it’s a very good show) are likely to be much less enthralled.

Despite their forthcoming takeover by Evolution Gaming, NetEnt does not seem to be taking the foot off of the gas when it comes to releasing new slots. With this release they remained on very firm ground, digging out the old ‘Irish’ theme as used in countless slots released before this one.

This game has three jackpots and a prize multiplier that spins with each rotation of the reels. In normal play, these multipliers are set at x1, x2, x3 and x5, but during free spins they increase to x2, x4, x7 and x15. In addition, a friendly leprechaun will throw bonus symbols onto the reels whenever he’s in a good mood.

A cute slot release from NetEnt that’s as nice as a pint of the black stuff!

The end of August and the beginning of September promises to be something of a bumper season for new UK slot releases if all goes to plan. NetEnt is at it again, this time releasing a slot in honour of sweary TV Chef Gordon Ramsay who will find himself in Hell’s Kitchen. Play’n GO will continue to churn out slots with Golden Ticket 2 and Octopus Treasure, while you may need to crack The Demon Code thanks to NextGen Gaming.

Make sure that you check back here in a week or two so you can learn all about the very latest online slots releases, thanks to the slotting experts at WhichBingo.