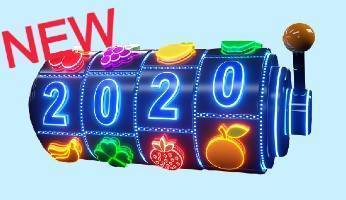 We hope you are keeping up to date with all the latest lockdown rules as issued in the UK by Her Majesty’s Government. Groups of up to six people can now meet up every third Tuesday unless it’s snowing and as long as they are all called Dave and are hopping on one leg with a finger up one’s nose. And all wearing a mask, of course.

For fans of the original (and who isn’t a fan of the original?) there’s no need to worry. The Megaways concept could not possibly have been applied to this classic title in any way better than has been done. There’s even an additional feature – Earthquake! When the Earthquake strikes little Gonzo sprints off the screen and any low-paying symbols crash down from the playing arena to be replaced by high-paying ones. Gonzo also displays a few more of his silky dance moves when he celebrates a big win with you.

In truth, the past two weeks have not been the most populous with new online slots, probably as developers thought there was no point releasing new slots with Gonzo’s Quest Megaways being released at the same time. One company that’s dared to sneak out a new release at the same time as the slotting world’s most anticipated slot of 2020 is iSoftBet. This is another ‘Book of …’ release (we can think of several more – Book of Ra, Book of the Dead, Book of Cats), this time based around the queen of the ancient, mythical realm of Sheba.

This retro-looking game has five reels and three rows, with ten paylines and a standard RTP of around 96%. If you get bookish here by landing enough book symbols (a minimum of three) you can earn yourself ten free spins. The game also features sticky wilds and symbols that double as both wilds and scatters.

The spectre of Gonzo’s Quest Megaways has not stopped Play’n Go from adhering to their ‘one slot release a week in 2020’ pledge. The latest title they’ve let out to frolic at online slots sites is called ‘Win-A-Beest’. This is a play on words on the name of the animal wildebeest. Did you know that a wildebeest is also known as a gnu? We didn’t – indeed it came as surprising gnus to us … ahem …

Putting the puns aside for a moment (which means we are not going to think up any gnu ones) this is a slot with five reels, four rows and ‘all ways pay’. The playing grid is arranged in a 2-4-4-4-2 pattern except then the ‘Win-A-Beest’ feature is triggered at which point all reels become four symbols high and the number of paylines increases from 256 to 1,024.

This medium-variance slot has an RTP of 96.12% and plenty of special features, including free spins and wilds that come complete with multipliers. Although this slot does not have a progressive jackpot you can still win up to 10,240 times the size of your bet.

Expanding reels seem to be something of the rage at the moment with new online slots releases and here, courtesy of Yggdrasil Gaming, is another title that boasts such a feature. Spin the wheels here and you could be spinning with an expanded playing arena that is up to six symbols high!

Valuable artefacts is the name of the game and the reels are covered with valuable symbols including a Faberge egg, a Chinese Urn and a British Crown. You might not quite be able to secure enough cash to make a purchase of such a valuable item playing this game, but you can still win up to 11,000 times your stake.

This is a standard slotting affair in so much as it have five reels and three rows and an RTP around 96 percent. This game has the cascading symbols feature – any symbols that are involved in a win (and there are twenty paylines) vanish from the reels to be replaced by ones that slot in from above.

This may not be a classic Yggdrasil Gaming title but it has wild multipliers, scatter symbols and free spins.

The end of July saw a whole wave of new slots being released including Willy’s Hot Chillies from NetEnt, Riddle Reels: A Case of Riches from Play’n GO, Ted Megaways from Blueprint Gaming and Heidi Goes Wild from iSoftBet.

Other August releases to look forwards to include the next release in Playtech’s Kingdom’s Rise series, Shadow Queen, plus Artemis v Medusa by Quickspin and Bombuster by Red Tiger. Check back for our next update to see how many of these releases we rated as being worth playing and how many we took out for one spin then did a quick left turn!