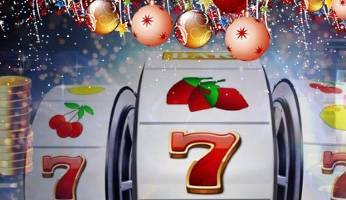 Well, we all thought that Christmas was just about up and running for the horrible year that has been 2020 but those scrooges, the UK Government led by Boris ‘Ebenezer’ Johnson has put the kibosh on that. Only ‘bubbles’ can mix on Christmas Day, which we suppose is good news for all people with that uncle who unleashes toxic farts once he’s had a few sprouts and starts banging on about Brexit after half a glass of port.

Proving it’s not all doom and gloom over the festive period these days, here we have a roundup of the best festive slots released in December 2020.

Many moons ago (2016 in fact) NetEnt released one of their most popular ‘cluster pays’ slots, Aloha! Cluster Pays. Many people thought they’d be quick to cash-in on the success of this slot but it has taken them four years to come up with Aloha! Christmas which sees the festive celebrations take place in the hot, hot sun of a Hawaiian island!

This game has all the magic of the original slot and of course that ‘cluster pays’ dynamic. Wins are earned by landing clusters of symbols as opposed to identical symbols on a payline. The minimum win is for nine symbols and of course the more symbols, the bigger the prize! A delight for both fans of the original and players new to this slotting concept.

Yggdrasil is becoming very much like Microgaming in that they release just as many slots via their subsidiaries as they do themselves. Christmas Tree is another example of this as it has been created by their subsidiary TrueLab Games.

Here the symbols are arranged in a Christmas Tree formation and all the action is watched with keen anticipation by a chirpy snowman to the left of the reels. This has the same dynamic as Aloha! Christmas as it’s a Cluster Pays slot as opposed to paylines. Also, like the slot above it takes a minimum cluster of five to trigger a win.

A gorgeous slot that’s almost as good as eating too many mince pies, Christmas Tree can be enjoyed at any online casino that carries Yggdrasil’s slots.

All About Christmas (Microgaming)

Why have one Christmas-themed slot when you can have two instead? That was the rule this year at Microgaming as they have already released a festive-themed slot this year called A Tale of Elves. All About Christmas is their second (and there’s a third too – Santa’s Wild Ride) although this slot has been made by one of Microgaming’s associates (and a new one on us), Golden Rock Studios.

This is a simple-looking slot that will appeal to those slots players who get a little bewildered by online slot games with too many bells and whistles. It has five reels each with four rows plus wilds and bonus symbols. You need a complete stack of bonus symbols on the first reel to gain a free respin, and if you fill the reels with bonus symbols then eight free spins are triggered which come with a real Christmas present – if you fail to win at least ten times your total bet during your free spins they are retriggered and so on until you do!

We seemed to have developed a theme in this round-up – slots by smaller companies that are being distributed by larger ones. Here is the third in a row that fits these criteria as Christmas Santa is made by Max Win Gaming but is being distributed by aggregator Relax Gaming.

The best aspect of this game is ‘Santa’s Ladder’ which is triggered when you land at least three Santa symbols on the reels. You are awarded five free spins during which any further Santa symbols you land are counted and collected. The more Santas you collect the better the benefits to you and if you reach the very top you are allowed a spin on the bonus wheel. Depending upon where the bonus wheel lands you could get extra spins, even more Santas and decent bonuses.

A fine game to find in your stocking come Christmas morning!

There is still time this year to enjoy yet more slots that are poised to make it out into the realms of slotland. The long-awaited sequel to Microgaming’s ‘best slot ever’ Immortal Romance – Immortal Creatures – should be out just before the end of 2020, along with Play’n GO’s Piggy Bank Farm and Lord of the Wilds from Red Tiger. Look out too for NetEnt’s next release, entitled Rome The Golden Age while their Fruit Shop slot is getting the Megaways treatment.

That’s it from your favourite slots roundup guys in 2020. Let’s hope 2021 is a much better year for us all but, to be honest, it’s hard to see how it could possibly be worse!