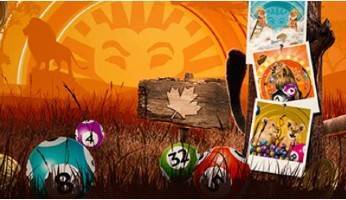 However, since PlayOJO announced the introduction of online bingo games last month, it’s possible that more casino brands will jump on board. And we’ve just discovered that the awarding-winning site, LeoVegas, is one such example.

The company says that it wants to “meet the growing demand for entertaining games” such as bingo in a bid to extend its appeal to today’s “broader and larger customer base”.

Although LeoVegas Mobile Gaming Group’s vision and position for LeoVegas is “King of Casino”, it now feels that the time is right to tap into the growing global bingo market which H2 Gaming Capital values at EUR 2 bn.

What bingo games will be available?

The brand is yet to confirm what platform will be used to deliver its new online bingo offering as well as a date for when the games will go live.

However, a screenshot that was included along with the recent press release indicates that the casino will feature 90-ball, 80-ball, and 75-ball games and indicate that the deal has been done with Pragmatic Play – there’s that name again!

The games will run in a choice of 6 branded bingo rooms, with Lion’s Roar and Lions in Heaven offering 90-ball games, and Leo’s Lair operating 75-ball games. Pragmatic Play is a perfect fit for sites such as Leo Vegas thanks to its ability to be fully customised to the client’s needs.

Will bingo be offered at LeoVegas’ other casinos?

Again, LeoVegas Mobile Gaming Group hasn’t confirmed whether bingo games will also be made available at its other online casinos such as BetUK and Slot Boss, but its brand Pink Casino has already added the bingo platform, so we think it is likely.

However, it already operates two other online bingo brands – Crown Bingo and Legs 11 – although it closed the doors of its third brand, Bingo Stars in recent months, directing players to Pink Casino instead. The company also pulled its Royal Panda casino from the UK market at the start of 2020.

This would indicate that LeoVegas Mobile Gaming Group is rationalising its site list while simultaneously broadening the range of games that are offered by its most popular UK casino brands like LeoVegas.

The Growing Popularity of LeoVegas

The LeoVegas brand was created back in 2011 in Stockholm, Sweden by Robin Ramm-Ericson and Gustaf Hagman. Its founders’ intention was to create the ultimate mobile gaming experience – and we think they have succeeded.

While LeoVegas’ long-term ambition is to become “the global market leader in mobile casino”, desktop players are by no means forgotten about.

The brand has now extended its reach into the international market with its home-grown casino and sports betting services.

Much of its success can be attributed to the way in which it markets and advertises its product. For example, a study that it carried out over the festive period in Denmark showed that reached more people through its Facebook ads than via TV.

LeoVegas has also proven its commitment to player safety by creating a dedicated website called LeoSafePlay which is intended to serve as a helpful source of information regarding gambling addiction and prevention and underage gambling.