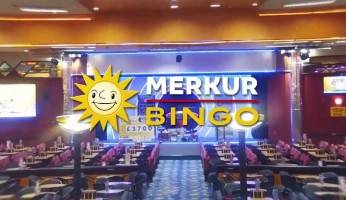 This week, Peter Aldous MP visited his local bingo hall to welcome back customers. However, rather than sitting down to play for a full house, Mr Aldous instead headed for the stage to temporarily act as the bingo caller.

Merkur Bingo in Lowestoft opened its doors alongside other English bingo halls last month. However, it was still technically the new kid on the block, having just rebranded, but the management team were pleased to see both old and new customers visiting over the first few days and weeks.

One customer, in particular, was made to feel right at home.

Peter Aldous has been the Conservative MP for Waveney since 2010, but this week, he took a break from politics to practice his bingo lingo as he stood in as the bingo caller for one of the club’s charity games.

The winner, who scored a full house after 66 calls, got to take home a £50 club voucher, and Mr Aldous was delighted for them.

The MP, who appeared alongside the Club Operations Manager, Tracy Hayward, told local journalists that it was “great that many people are getting back and returning to bingo, which in this location is part and parcel of Lowestoft.” He added that it was “absolutely crucial” that older people be able to combat loneliness by getting out and socialise with friends.

Ms Hayward was also eager to point out to the UK government that bingo “is not all about gambling”. She says that players often make new friends at the venue, which considers itself “a bingo family”

Merkur originally went by the name Beacon Bingo until last month. It has bingo halls in Northampton, Lowestoft and Cricklewood, and it also operates a number of Merkur Slots arcades across the UK.

The Lowestoft club was completely rebuilt in the summer of 2000, and when it is allowed to operate at full capacity, it has seats for 623 customers across two floors.

The fully air-conditioned venue on Battery Green Road also boasts two bars and an American-style diner, as well as an outdoor smoking balcony that overlooks the harbour.