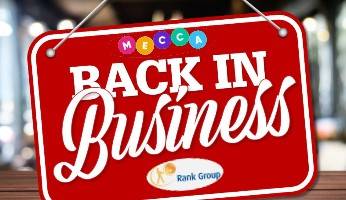 Mecca Bingo is Back in Business After Pandemic Losses

The Chief Executive of the Rank Group says that the past year has been “exceptionally challenging” due to most of the company’s venues having to temporarily close their doors. Now, however, it seems as though the Group is seeing “encouraging progress” since restrictions were eased on 17th May 2021.

Betting shops, bingo halls and casinos all suffered significant losses due to their forced closures during the worst stages of the COVID-19 pandemic.

However, now that most of the UK has fully unlocked, bingo operators like the Rank Group are finally starting to see their fortunes change.

During the height of the pandemic, the Rank Group was losing £15m per month due to its land-based casinos and bingo halls being unable to open. Its digital operations such as Mecca Bingo and Grosvenor Casino also underwent a “year of transition” which led to disappointing revenues.

It’s estimated that its land-based venues account for four-fifths of its total revenues, and as a result of the pandemic, this meant it saw its revenues halved between June 2020 and June 2021. So, it’s no surprise that Rank’s Chief Executive, John O’Reilly says “we are delighted it is over”.

Things are now looking up

Now that the operator has been able to reopen its UK venues, the Group’s Chief Executive says they are “trading positively”, and its online brands are also making “good progress”.

The Rank Group has taken all possible steps to increase consumer confidence by making its venues as COVID-safe as possible, and a recent survey showed that more than 90% of its Mecca Bingo customers felt that the new safety measures had either met or exceeded their expectations.

Up until July 2021 its venues were operating with reduced capacities, table service and socially distanced seating, and customers still have the option to use contactless payment methods rather than cash.

Since its casinos and bingo halls were allowed to recommence trading in May 2021, the business has bounced back better than expected. The Group is also confident that it will enjoy further growth as tourism returns (to London, in particular) and travel restrictions ease.