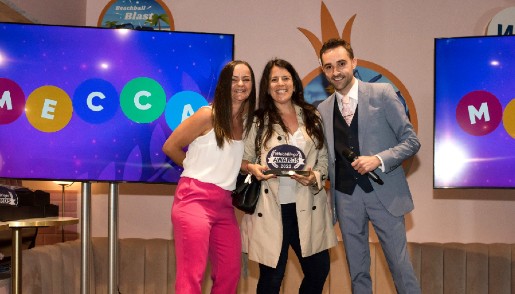 One brand that has performed consistently well since the WhichBingo Awards began is Mecca Bingo. This year, it romped home holding an impressive three separate awards, and true to form, it hurried to thank its members for casting their votes by holding a series of celebrations.

What awards did Mecca Bingo win?

A recently new addition to Mecca Bingo is MeccaTV – an exclusive streaming channel that you can watch while you play your favourite bingo games. The channel includes coverage of promotions such as Mecca Dream Come True and Catch the Cash, as well as interactive shows with celebrity guests that are broadcast Live from Studio M. Our judges felt that the format and concept of MeccaTV put Mecca Bingo firmly at the top of the Best Live Streamed Entertainment award nominees list!

What did Mecca do to celebrate its hat-trick?

Last weekend (Saturday 9th and Sunday 10th July 2022), Mecca Bingo ran a stream of online promotions that saw it give players the chance to win double prize money by playing free games in the Lucky for Some Room and win as much as £1,000 in the Firecracker Room.

A spokesperson for the brand thanked all its teams for working “incredibly hard” to provide Mecca Bingo players with the best possible online bingo experience. They added that the “brilliant wins” that the company achieved at this year’s WhichBingo Awards meant that they wanted their players to be able to celebrate too as “they were the ones who voted for us”.

How has Mecca Bingo performed at previous WhichBingo Awards?

Mecca Bingo is no stranger to the spotlight when it comes to the annual WhichBingo Awards.

It was voted Best Bingo Site in 2006 and 2012, and in 2021 (a year in which it carried out a brand refresh to mark its 60th birthday), it took home the awards for Most Socially Responsible Operator and Best Mobile Bingo Site.