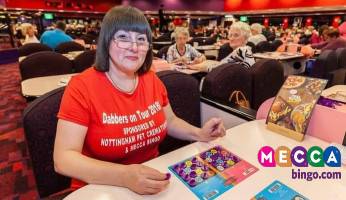 The long-term Mecca Bingo fan has been taking in some of the UK’s finest bingo halls. As part of her 60th birthday celebrations, Yvette Price-Mear will be helping to raise funds for some of her favourite charities.

Yvette, from Mansfield Woodhouse, loves bingo almost as much as she loves her three grandchildren. So, when it came to thinking of ways to celebrate her impending 60th birthday, x came up with something refreshingly different that would allow her and her friends to enjoy a bingo marathon while also helping good causes.

As a die-hard fan of Mecca Bingo, Yvette thought that it would be a great idea to use her birthday bingo tour to help raise funds for charities dear to her heart. And as Mecca Bingo is hosting a Bingo-a-Thon as part of its own 60th anniversary celebrations, Yvette has created her own 60 Club Bingo-a-Thon.

Friends, family and bingo fans from across the UK can help to sponsor Yvette via her GoFundMe page. She is hoping to raise at least £1,000 for her own charities, including Pet Bereavement Support which she founded, her local Scout Group, and Mecca’s official charity partner Carers Trust.

Locations that Yvette will be visiting on her tour

Although Yvette’s 60th isn’t until 19th December, her tour will take time and money to complete.

It started earlier this week when Yvette and her pals dropped by Mecca Bingo’s Glasgow Forge bingo hall before carrying on this weekend to other city clubs including Hamilton, Paisley and Wishaw.

The big 60th will be celebrated the week before Christmas at Mecca Bingo’s oldest bingo hall at Rosehill.

At each stop on the tour, the lucky bingo lover will be treated to free food and drink as well as free entry to the club’s bingo games on the basis that anything she wins will go towards her fundraising pot.

WhichBingo wishes Yvette the best of luck on her 60 Club Bingo-a-Thon, and let’s hope she wins lots of prizes to help her favourite charities!