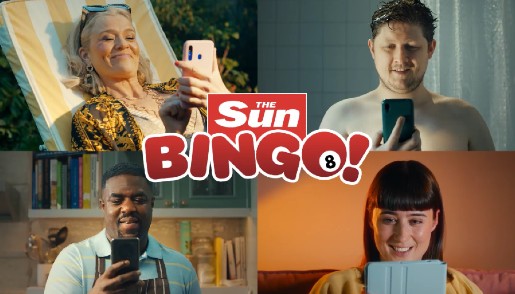 Meet the Soap-Studded Star of the New Sun Bingo Ad

Nearly all of us remember when Jayde Adams burst onto our TV screens, asking “are you gonna bingo?” She was the face of Sun Bingo for quite some time and frequently had us giggling at her mock-gangsta antics. However, times change and so do advertising campaigns, and now, Sun Bingo is back with a brand-new TV ad that introduces us to four new characters, the first of whom is Shower Man.

Who are Shower Man and the other characters?

The new ad opens with a man (Sassy Sam) preparing a meal in his kitchen and while discovering that his creation will take a bit of time to cook, he decides that he’s “gonna bingo” on his mobile phone. He then shouts out to his bingo buddy Charlie64 to see if she’s also planning on playing. Charlie64 is relaxing on a sun lounger in her garden and quickly grabs her phone to log in to her Sun Bingo account.

Charlie64 then calls out to Geordie George to see if he wants to join them. Unfortunately, George, who Sun Bingo have dubbed “Shower Man” is taking a shower and says that he can’t play right now but might join them later.

Charlie decides to give a shout-out instead to Heather93 who’s relaxing in front of her TV. There can’t be much worth watching as Heather hastily throws her TV remote to one side while saying “Yeah. I’m definitely gonna bingo!”

To tie in with the new ad campaign, The Sun newspaper published an article about Shower Man the other week, and it turns out that he’s quite partial to a game of bingo.

In real life, he’s an actor called Ben Welford, and his favourite tunes to take a shower to are Paolo Nutini’s “Pencil Full of Lead”, Dolly Parton’s “9 to 5”, and Elton John’s “Crocodile Rock”. He jokingly adds that he takes his “job as Shower Man very seriously”, although he confesses that he’s also partial to baths accompanied by bath bombs, the latter of which he says cause the glitter to go everywhere.

Is he gonna bingo?

Shower Man says that he has fond and vivid memories of going to the bingo with his grandmother as a kid where he was given a fake dabber and pad. His favourite number is 6 as he was born on the 6th of the month and plays football wearing the number 6 shirt. He’s also a Newcastle United fan and says that he was once accidentally run over by his dad.