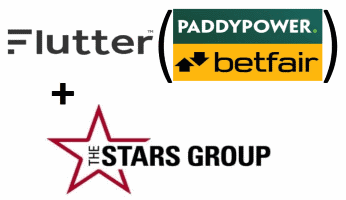 The world’s biggest betting company is set to be created very soon. The news has broken that Canada’s The Stars Group (TSG), which operates poker site PokerStars along with other leading online brands like Full Tilt and FOXBet, will merge with UK-based gaming and betting operator Flutter Entertainment (formerly known as Paddy Power Betfair).

The deal, which is set to be completed in mid-2020, will see Flutter shareholders take a majority stake and the new business will be based in Dublin. The new Combined Group will be headed up by Gary McCann, the current Chair of Flutter Entertainment, with the CEO role being taken by Peter Jackson, the position he presently holds at Flutter.

The City seemed to approve of the news as the value of shares in both companies has risen, signalling broad investor approval of the merger. It is also widely anticipated that the merger will comply with UK competition law and that it will, in time, receive all the necessary regulatory approvals.

Combined Group will have access to a huge market base

The new organisation, which is yet to be named, will see a significant number of the world’s leading betting brands — including the UK’s SkyBet, BetEasy in Australia, and US brand FOX Sports — all being run under the same umbrella. It is estimated that the Combined Group will be operating in more than 100 international markets and have around 13 million active customers.

Significantly, Flutter and The Stars Group are already major players when it comes to UK online gambling and betting market share, with the two currently thought to control about 25%. However, their combined forces are even more dominant when it comes to sports betting alone, with Flutter (under its Paddy Power and Betfair banners) having around a 21% market share, and the SkyBet group (controlled by TSG) about 16%. The two companies’ combined annual revenue in 2018 would have been £3.8 billion – that’s an extraordinary figure!

Changes in US law surrounding gambling has made that market more attractive again and this new company will have a head start in that area given its background. Interestingly, this change in the law has also prompted a number of other significant mergers, as UK-based online gaming companies have scrambled to get a foothold in the hugely lucrative US sports betting market.

It is nevertheless expected that the various brands that will come under the control of the Combined Group will continue to operate as discrete entities, which has been the strategy Flutter has employed since Paddy Power and Betfair merged in 2016. In Australia, for instance, it is anticipated that Sportsbet, which is operated by Flutter, and TSG’s BetEasy, will continue to be run separately.

“We’ve had a lot of experience of operating a multi-brand strategy and the way we want to continue to do it in the US is to maintain the purity in terms of customer databases,”

Flutter CEO Peter Jackson said, when news of the merger was announced.

M&As — the shape of things to come?

This coming together of two powerhouses has fuelled speculation about more mergers and acquisitions forthcoming in the online gaming and betting industry, as operators seek to consolidate their positions in the wake of changing legislation in some European jurisdictions,  and as a means of putting themselves in place to capitalise on the burgeoning US sports betting market.

However, what punters may not be aware of is the fact that both Flutter Entertainment and The Stars Group are themselves the products of significant mergers and acquisitions between big players in the industry.

Rebranded and relaunched in March 2019, Flutter Entertainment is the new name for the company that emerged out of Irish bookmaker Paddy Power’s merger with UK-based Betfair in 2016 (it operated as Paddy Power Betfair up until this year).

In addition, there are a number of other brands also controlled by Flutter, such as Sportsbet in Australia, TVG (the American TV horse racing channel), and FanDuel, the leading fantasy sports betting site in the US. All of these retain their own identity and cater to their own separate player bases, but they are nevertheless part of the much larger Flutter organisation.

Ultimately, it is not expected that this merger will impact on loyal customers of either operator. As has been demonstrated in the past, when major players in the online gaming and betting industry come together they tend to retain the identity of the brands they operate, as these, along with a loyal customer base, have been hard earned and so are not given up lightly.

Therefore, if you currently bet or play with any of the brands under the Flutter or TSG umbrellas, it is unlikely that you will experience any significant change or disruption to the platform when the merger is finally completed some time in 2020.