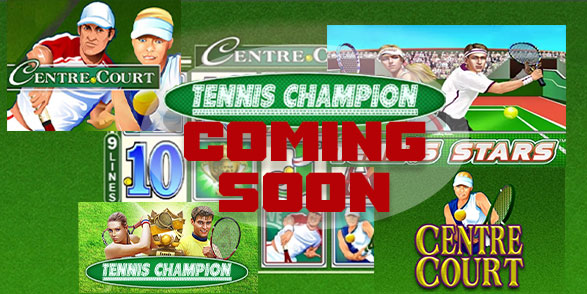 If there’s one thing that’s guaranteed to unite millions of Britons over the summer months, it’s the Wimbledon tennis tournament. Now that this year’s winners have been crowned, some of us are missing turning on the TV to see the cream of the tennis crop do what they do best. So, to keep the momentum going, we’ve sourced some brilliant tennis-themed slots that you can play at many popular online bingo sites.

You can’t get closer to the heart of Wimbledon than in Centre Court, which also happens to be the title of a Microgaming video slot that made its debut in June 2009.

You can find it at Microgaming casinos and bingo sites like Butlers Bingo, and it uses 5 reels and 9 paylines.

The top prize is worth 1,000 times your total bet, and the graphics include images of male and female tennis players, Match Point symbols, tennis balls, and trophies.

The tennis ball is the game’s scatter symbol, and it can trigger the Free Spins Bonus which can be retriggered an infinite number of times. The trophy is the wild symbol, and it can help to create winning combinations by replacing any symbol apart from the scatter.

The Tennis Stars slot by Playtech can be found at The Sun Vegas, the sister site of The Sun Bingo.

It uses 5 reels and 40 paylines and has a minimum bet-per-spin of 40p.

Tennis Stars boasts two bonus features. The Free Spins Bonus is triggered when the wild symbol lands on reels 2, 3, and 4 and it awards 15 free games. Plus, any wins are tripled. The Championship Bonus is awarded when 3 or more scatter symbols land anywhere in view and it gives you the chance to take on the computer in a virtual tennis match.

Spinomenal has only just released its Tennis Champion slot, so it should be appearing at UK bingo sites and casinos very soon.

It comes with a host of tennis-themed symbols including balls, water bottles, headbands, trainers, trophies, rackets, and players/

The female tennis player represents the wild symbol while the male player acts as the scatter symbol, the latter of whom can give you between 5 and 12 free spins. Tennis Champion also comes with a Winning Multiplier Feature that boosts the multiplier value by 1 with each consecutive non-winning spin up to a maximum of x15.