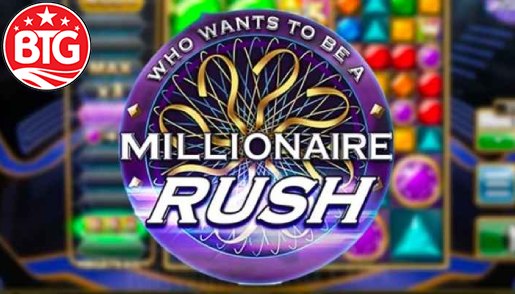 Big Time Gaming slots regularly feature at online bingo sites, especially the developer’s first hit, Bonanza, which brought the world the Megaways system. Now, the Aussie-born software company has created yet another thrilling game mechanic. It’s called MegaTrail and today, we’re looking at how it works and where you can find it.

MegaTrails is the newest game mechanic from Big Time Gaming, and it’s making its debut in BGT’s Millionaire Rush slot.

Millionaire Rush is the latest in the Who Wants to be a Millionaire slot franchise, the latter of which has already been given the Megaways treatment.

The mechanic uses a ladder that’s made up of 12 rungs, each of which contains a bonus feature. The majority of these bonuses are randomly assigned in each base game spin. However, the 7th rung always awards 6 free spins while the 12th rung awards players an instant prize of 1,000 times their stake.

As this is the first time that BGT has used the MegaTrails feature, its format may change when it appears in future BTG games.

Tell me more about Millionaire Rush

MegaClusters makes it possible to win cash prizes by forming clusters of matching symbols that are adjacent to one another, and the “split and react” feature means that it’s possible to create clusters of up to 100 symbols.

The game also has a Free Spins Bonus that is automatically awarded when the player reaches the 7th rung of the MegaTrails ladder. During the bonus, the MegaTrail is enhanced with more generous bonuses, and the top rung offers a top prize of 2,000 times the total stake.

Big Time Gaming, which was acquired last year by Evolution Gaming, can’t wait to get player feedback on its latest invention. The company’s CEO Nik Robinson believes that it will keep “players on the edge of their seats” and is excited about the “fast-paced” nature of the game and its dazzling new MegaTrail feature that can deliver “some incredible big win action”.

Where to play Millionaire Rush

As Millionaire Rush has only just been released, we expect it to be arriving at major online bingo brands like Foxy Bingo very soon.