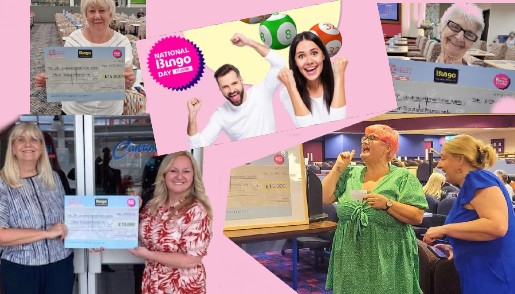 As part of National Bingo Day 2022, The Bingo Association invited MPs to get involved at their local bingo clubs. Many accepted the offer, with some even taking the opportunity to act as bingo callers for the day. They also helped the clubs to raise funds for the Emergency Appeal for Ukraine.

Although we can only go by what we’ve seen in local newspapers and on social media, many members of parliament around the UK took part in the second National Bingo Day celebrations. Below are just a few examples of who was spotted on Monday, 27th July.

In Worthing, Sir Peter Bottomley MP headed into Buzz Bingo on Rowlands Road to meet “the caring bingo hall staff [that] help to foster a familiar sense of community that has been there for members throughout the past two difficult years”. He also congratulated the club for helping to raise £15,000 for the Emergency Appeal for Ukraine and thanked the local community for making so many Ukrainian refugees feel welcome.

Carlton Bingo in East Kilbride invited Dr Lisa Cameron MP to call the numbers on National Bingo Day. The MP for East Kilbride, Strathaven, and Lesmahagow was pictured holding a charity cheque alongside the club’s manager outside the venue during the afternoon session.

Carolyn Harris MP made a guest appearance at Swansea’s Mecca Bingo where she called the numbers during a charity game to raise funds for the Ukrainian Humanitarian Appeal. She says that the club has been “integral” to the #EveryoneDeserves campaign – a Mecca Bingo initiative that helps to deliver Christmas hampers to those in need. She adds that the bingo hall also does “valued work in the community, so I am more than happy to support them”.

While we’re unsure whether Buzz Bingo in Hanley welcomed any local MPs on National Bingo Day 2022, we do know that the club had one of the biggest celebrations. Its National Bingo Game winner took home an extra £1,000 in prize money. Plus, as the venue had the lowest number of calls on the game, its players got to share a £50,000 community jackpot.

We are sure there were many more enjoying the fun in their local bingo halls and well done to all involved for helping make National Bingo Day a resounding success.