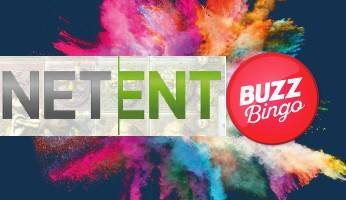 Buzz Bingo seems to be consistently in the news at the moment. Now, the biggest bingo operator in the UK has announced that it has just added NetEnt’s full catalogue of online slots to its games lobby, giving its many members more choice of entertainment than ever before.

Buzz Bingo has already integrated some of the Swedish software developer’s top titles, including Gonzo’s Quest and Starburst, and many others are set to follow in the coming days.

Everyone is happy with the deal

Buzz’s Chief Digital Officer, Stevie Shaves, says that “it’s great to finally have NetEnt content on Buzz Bingo” and describes the forthcoming games as “first-class” and believes that they will “resonate incredibly well” with the company’s players.

NetEnt’s Andy Whitworth calls the partnership “a great achievement” and says that he’s confident that both NetEnt’s most popular slots and upcoming releases will prove to be “top performers” at Buzz Bingo.

One of the games that we’re hoping to see in the games lobby at Buzz in the next week is the newly launched Twin Spin Megaways.

Twin Spin Megaways includes many of the iconic features such as Twin Reels that led the original Twin Spin slot to be so successful, and it also uses the popular Megaways mechanic, as well as free spins and an Avalanche feature.

NetEnt’s Divine Fortune progressive jackpot slot has received a recent makeover as well. So, we could well be seeing Divine Fortune Megaways making its debut at Buzz very soon.

Good news amongst the bad

Buzz Bingo is one of several bingo chains that has been forced to close its doors to customers while England undergoes a second national lockdown. However, its two Scottish venues in Aberdeen and Dumfries remain open.

Luckily, Buzz Bingo also operates online, so many club players have been able to continue socialising via the site’s chat rooms and enjoying their favourite bingo games in rooms like Blast, Value, The Voice Bingo, Flash, and Rainbow Riches.

The site is currently gearing up for a Black Friday special which will see a Bingo Millions 90-Ball £10m Mega Draw take place on Friday, 27th November 2020. The game’s top prize jackpot is worth a minimum of £10m provided the full house is called within 30 balls or fewer.

Furthermore, players have until early January 2021 to try and win themselves a £3k tech bundle in the operator’s £1m Christmas Spinner promotion. There are also guaranteed prizes to play for daily including bingo bonuses, free spins, cash, and prize draw entries.

The tech bundle includes a range of exciting gadgets including a 43” 4K UHD Smart TV, a Macbook Pro, an iPhone XR, and a Google Home Hub.