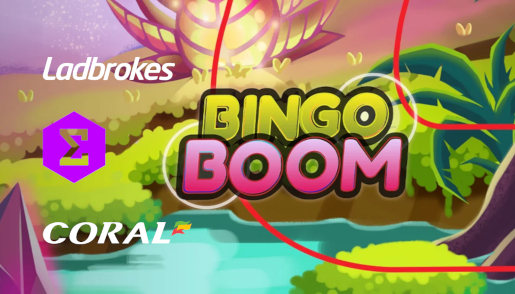 A new online bingo room has just arrived at some of the UK’s best-loved bingo sites including Coral Bingo and Ladbrokes Bingo. It’s called Bingo Boom and it hosts 90-ball games, but not 90-ball games as you know them. Find out more about Entain’s latest creation right here!

What is Bingo Boom?

Bingo Boom is a type of 90-ball bingo that was invented by Entain’s in-house team of software developers. The same team is also responsible for making Entain’s own versions of Deal or No Deal Bingo and Fluffy Favourites Bingo, and the Entain-exclusive Bingo Beats and Friends Bingo.

It’s a dedicated online bingo room that has varying ticket prices, starting at 5p and costing no more than 50p.

Above the panel where any tickets that you’ve purchased are displayed, there’s a separate area in which a feature game plays at the same time as the balls are announced.

The feature game is made up of a grid that is populated with coloured gemstones as each ball is called. By dragging the gems using your computer mouse or finger, it’s possible to create horizontal, diagonal, and vertical lines of 3 or more matching gems. Each time you make a match, you gain points, which helps you get closer to the full house multipliers. And, if you win a full house, the prize is multiplied by whatever multiplier you’ve managed to unlock.

Where can I find out more about Bingo Boom?

As avid online bingo fans, we’ve already raced over to check out this exciting, new room and put everything that you need to know into one handy guide. Read it today to find out how to play and what you can win! What we can tell you right now having played the new game is that the feature game is a bit of a challenge, but very entertaining!

Where can I play Bingo Boom?

You’ll find Bingo Boom at all the most popular Entain bingo brands including Coral Bingo and Ladbrokes Bingo.

What else is new at Entain brands?