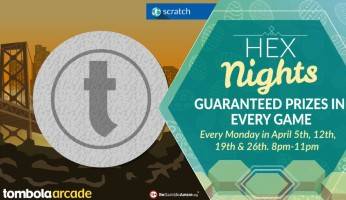 This week, Tombola Arcade has launched a new scratch card game called Heroes which now sits alongside its three other scratchers which are called Space, Treasure and Jungle.

If you’re a fan of Marvel or DC superheroes and villains, you’ll appreciate the fun comic book theme that Heroes uses. Plus, there are even some cool animation sequences in the background that show masked characters jumping through the air while the New York City skyline dazzles you with its bright lights from across the river behind them – a bit too bright according to the first reactions of some of the players!

The new scratch card, Heroes, is simple to play and you can choose how much you wish to spend on each game, with options between 5p and £1.

On the screen in front of you, there are 9 silver coins and all you need to do is click on them one by one to reveal a different hero. Match three heroes and you’re rewarded with a prize of up to 500 times your stake.

The Heroes scratch card is one of several new games that Tombola Arcade has debuted in recent weeks, and there are now a total of 11 genres available including Emoji, Cards, Spin and Bubble.

Over on the bingo site, there’s also a new and improved version of Tombola’s popular Roller-Coaster bingo game to enjoy.

The operator has been introducing plenty of extra promotions too such as Two Line Tuesday (which includes a two-line prize in every Picture Bingo game), Hex Nights (guaranteed prizes of up to £250 to play for between 10 PM and 11 PM), and High 5 Mondays (where you can win up to £1,500 in the Bingo75 Lines room).

In recent months, the site has been running weekly quizzes and themed nights alongside its regular chat games, and there have been some cracking prizes up for grabs such as Amazon vouchers. To find out what’s on this week, visit the Community Hub page at Tombola.