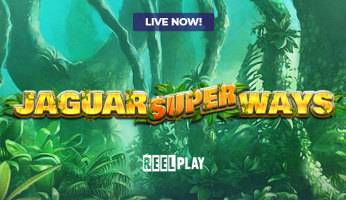 One of Yggdrasil Gaming’s partners has just created a slot that has the potential to offer players over 387 million ways to win! Even Megaways slots don’t give you that many ways to create winning combos! We also look at how side games for bingo players are changing thanks to software developers like Gaming Realms, Pragmatic Play, Evolution Gaming and Gamevy.

A brand-new slot called Jaguar Superways is set to take the online gaming industry by storm.

The game was created by a company called Bad Dingo, and is powered by Gati by Yggdrasil – a bigger company giving smaller offshoots a helping hand.

What makes Jaguar Superways stand out from all the other recent releases is the fact that it combines cascades with expanding symbols to give you more than 387,000,000 ways to win.

The 5-reel slot is set in a South American jungle and gives you the chance to encounter a range of wildlife. The game delivers never-before-seen features to deliver an exciting and unique playing experience that fans of Megaways games are sure to love.

Each time that you hit the Spin button, you have a minimum of 243 ways to win and when the bonus feature is active, the minimum number of ways to win rises to 1,024.

The bonus feature awards up to 20 cascading spins but when special giant pawprint symbols appear next to a winning symbol, the reels expand both horizontally and vertically to give you up to 387,420,489 ways to create winning combinations.

Although it’s yet to be confirmed which online bingo brands will offer Jaguar Superways, we’ve noticed that the majority now feature an increasingly varied range of side games.

Slingo, for example, now comes in many different forms such as Slingo Starburst and Slingo Extreme.

The selection of slot games is also expanding, and Megaways slots have proved particularly popular among bingo players.

There are more casual games, lottery-style games and instant wins appearing at online bingo sites too, including Gamevy titles like Diamond Deal and Boss the Lotto.

With the imminent arrival of Jaguar Superways and its 300m+ ways to win game engine, we can’t wait to see what software developers will come up with next! For now, you can give the game a try at PlayOjo.