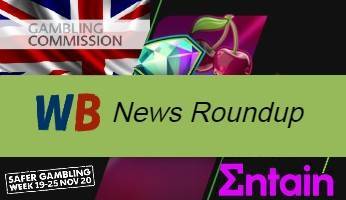 In this week’s news round-up, there’s an update on Safer Gambling Week, a new TV ad campaign from Buzz Bingo, the final edition of Radio 1’s Innuendo Bingo, a new strategy and name for GVC Holdings, an exciting new Megaways slot from NetEnt, a telling off for BoyleSports, and a charity partnership between RailAid and MrQ.

The Bingo Association has just released further details about this year’s Safer Gambling Week which runs from 19th to 25th November.

The Association is providing a wide range of digital material that operators can utilise, as well as physical posters and leaflets that can be used in betting shops, casinos, and bingo halls.

The campaign contains 6 key messages that aim to raise awareness of responsible gambling such as “Play smart – know when to stop”, “It’s good to set yourself limits”, “Ask yourself, have you carried on past your spending limit?”, and “Remember – family and friends are more important than gambling”.

Boylesports is taken to task by UKGC

The UK Gambling Commission has issued BoyleSports with a £2.8m penalty after it found that the operator had failed to safeguard “appropriate money laundering risk assessments”.

It also ordered BoyleSports to perform extra requirements such as continuing to review the implementation and effectiveness of its AML policies, controls, and procedures, appointing an MLRO (Money Laundering Reporting Officer), and ensuring that all of its key control staff, senior management, and PML holders undertake anti-money laundering training.

New strategy and name for GVC

GVC Holdings PLC, whose brands include Coral, Ladbrokes, Sportingbet, Bwin, Party Poker, and BetMGM is rebranding under the new name of Entain PLC.

The move forms part of the company’s latest strategy for sustainability, growth, and innovation which will be driven by a range of strategic initiatives and its proprietary technology.

GVC’s Chief Executive describes the plans as “an exciting new chapter” that will help it realise its “ambition of being the world leader in sports betting and gaming”.

The number of symbols that can appear on the reels is randomly determined at the start of each spin, giving a maximum of 117,649 Megaways.

Radio 1’s long-running Innuendo Bingo has been culled due to concerns over COVID-19.

The show, which has been running for 13 years, involves spitting and hence BBC bosses have decided to retire it.

RailAid teams up with MrQ

The children’s charity, RailAid, has joined forces with the popular online bingo brand, MrQ, to host a charity bingo game that will be held via a YouTube live stream and on MrQ’s website.

RaidAid Week runs from 23rd to 30th November 2020 and is set to include a range of exciting events such as a quiz, an online auction, and a big bingo game.

The fundraising bingo event will feature Kelvin Fletcher from ITV’s Emmerdale and the first game will kick off at 7 PM on Tuesday, 24th November.

Tickets are on sale now in the MrQ lobby.

Buzz Bingo is getting into the festive spirit early with a brand-new advertising campaign that will run for 8 weeks.

“Get Ready to Win” encourages players to share their bingo winning face for the chance to win one of 8 tech prizes in its Christmas Spinner game.

The goodies that are up for grabs include a Google Home Hub, a Macbook Pro, an iPad Air, a Playstation 5, a 43” 4K Smart TV, and an iPhone XR.

The campaign has been designed by Buzz’s newly hired marketing company, MSQ Partners, the latter of whom say they “hope our cheeky campaign brings a smile to many over this festive period”.